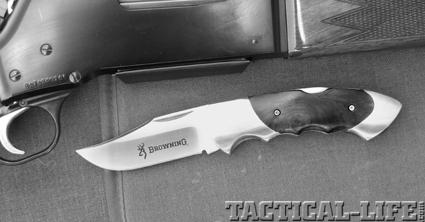 The lock-blade folding hunter has been part of the hunting scene for nearly a half-century. Everywhere I’ve hunted, from the wilds of Alaska to southern Africa and beyond, at least one person in camp has had this particular knife design on their belt. Rightfully so, since the knife sports a versatile clip-pattern blade, a rugged, back spring locking mechanism and warm hardwood handle scales. It is the very essence of a medium-size fixed-blade in easy-to-carry compact folding configuration.

Guide Designed
Former Alaskan big game guide and knife maker Russ Kommer has redesigned the folding lock-blade hunting knife concept and updated it with upscale blade steel. Working with the folks at Browning, Russ sought to enhance user comfort and knife performance. “Most of the clients who hunted with me carried some type of lock-blade folder. I noted that even though the knife design was functional in a wide range of game care chores (field dressing, skinning and trophy work), the square edges on the knife handles became uncomfortable after a while. Also, the blade steel needed constant edge maintenance to keep the knife safely in the game,” Russ said.

Since Russ had considerable experience with Swedish Sandvik 12C27 blade steel previously, he immediately selected that particular steel for his new folding hunter. “The steel has almost no foreign inclusions, so it polishes easily and offers a clean finish. However, the best feature is that it outcuts any of the 400 series stainless blade steels by a mile,” he said. Russ decided to stay with the clip-point blade pattern mainly because it was familiar to hunters, as well as offering tremendous functional diversity. However, the weakness of this blade pattern can be found in the rather thin tip. “Several hunters had reported blade tip damage when using a clip-pattern. Such damage was probably caused by laterally stressing the blade tip. This can happen when a hunter removes the head skin cape from an animal and ends up prying the hide free from around the base of an antler or horn,” he stated. 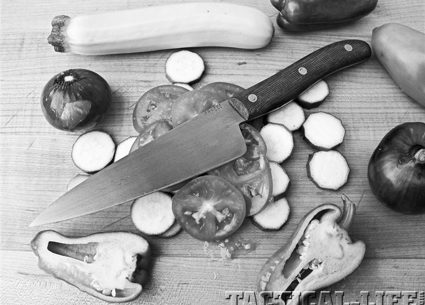