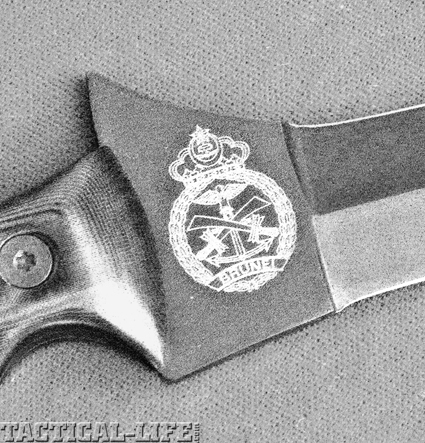 Closer view of the Brunei crest on the Kris’s ricasso.

When I first heard about the Brunei Armed Forces Knife, I was immediately anxious to learn more about it. The knife itself is a modern take on the traditional Malay kris. Many who have only seen the cheap bazaar samples of the kris brought back from World War II, normally with loose handles and blades worn from much cleaning, may find it difficult to think of it as a serious military blade. But remember, the kris killed a lot of U.S. troops during the Philippine Insurrection (though this type of knife is often known as a “kalis” in the Philippines). Although many think of the kris as having the wavy blade, there are also those with a straight blade. Both types are intended primarily for thrusting.

Combat Steel
Brunei Armed Forces Kris is actually a fairly good military utility knife, still capable of deadly thrusts but also capable of hacking or slashing. From point to end of the blade, its overall length is a little over 11.5 inches, and about 10.5 inches of the double-edged blade is sharpened. As with the traditional kris, the blade flares outward at the ricasso to form a crossguard of sorts. The top of this “crossguard” is sharply pointed and could injure on purpose or by accident. The blade is of 420 stainless with a black Fluoralon coating on the example I have. Polished stainless versions are available as well. The Brunei crest is etched onto the ricasso of the Kris. 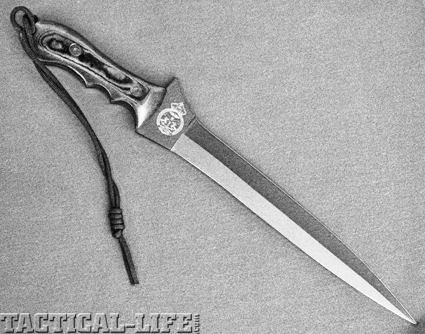 A view of the Brunei Army Kris showing the distinctive straight-blade Kris shape and the Brunei crest.

The finger-grooved handle is black linen Micarta attached to a full-length tang. The handle has a hole for a wrist thong of nylon cord. A leather sheath by Ben Orford retains the Kris through friction and has a folded-over belt loop. 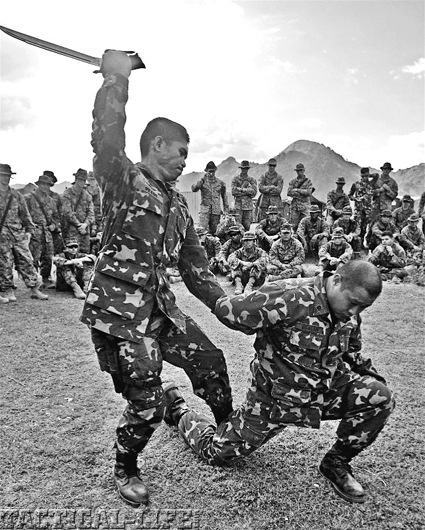