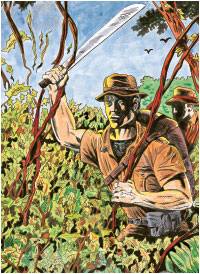 Although as a practicing field archaeologist I occasionally have to resort to larger fixed blades, most of my work experience with cutlery has involved folding knives and multi-tools. My practical experience with machetes started during the summer of 1977. I had just signed on to participate in my first North American archaeological survey with an anthropology curator in western Massachusetts. He had successfully bid on a contract to conduct an archaeological survey as part of the environmental impact cultural study legally required before parts of the October Mountain State Forest could be developed for recreational purposes.

The survey consisted of mapping out a giant grid pattern with transit, compass, and 50-meter measuring tapes over the areas to be impacted. We were then expected to walk along each of our transit lines and dig shovel test holes at intervals of 30 meters, screen the removed soil with portable screens for prehistoric Indian artifacts, and map the location of any finds for further investigation. This may sound easy until one realizes that we each needed to carry about 35 pounds of shovels, screens, surveying equipment, and shoulder bags over miles of hilly, broken ground covered by densely packed vegetation of all sorts.

As the curator described the possible working conditions that he expected his four team members to contend with, I realized that my Swiss Army Knife might not be adequate for the job. We would probably need bigger blades, but his shoestring budget did not allow for the purchase of several machetes. My thoughts then turned to a neighbor who had served as an army dermatologist in Vietnam. He had obtained an Ontario machete while there for jungle travel in order to treat GIs suffering from nasty forms of jungle rot. I had previously seen this machete in his garage while doing landscaping for him weeks before to supplement my meager student income. He gladly offered to loan me the sheathed tool for the duration of my fieldwork, and I accepted.

I was disappointed to find the 18-inch blade in poor condition as I unsheathed it in my father’s basement workshop. The machete was completely rusted and dull enough that I could run my palm over its dented edge without fear of being cut. A machete in this condition would be useless to me in the field. Additionally, this tool had served my neighbor well in Vietnam, so I felt that it should have been treated with respect.
A workbench vise and variable electric drill with wire brush bit enabled me to remove the surface rust, while a grinding stone bit followed by a fine whetstone restored the edge to functional sharpness. An application of cold gun bluing completed the blade’s restoration.

The refurbished machete proved extremely useful in the field, since the curator had underestimated the density of the vegetation that would block our transit lines. I was by far the wiriest member of our team and this, plus my possession of the machete, meant that I had to clear surveying paths through the worst of the vegetation. Time and again I was able to slash my way through chest-high concentrations of thorny blackberry bushes entangled with thick vines. The carbon steel machete functioned perfectly, and the edge required only minor periodic touchups to keep it sharp.

Once the survey was over I cleaned, sharpened, and reblued the machete a final time before returning it to my neighbor. He was so pleased with the restored condition of the machete that he gave me another blade also brought back from Vietnam, a well-worn Camillus USAF survival knife, which had, in turn, been given to him by a grateful Marine for treating his severe foot fungus. I still occasionally use the Camillus in the field when a blade larger than my folders is required, but I always treat it with the respect due an old veteran.                 TK 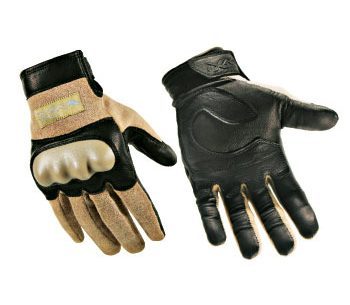