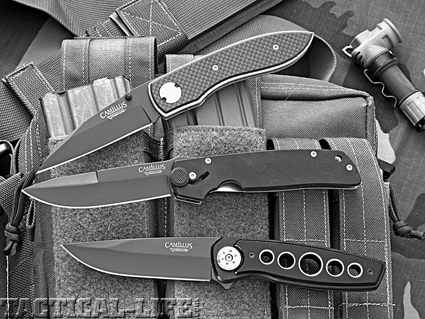 Top to bottom, the new Camillus Models 18519 folder, M18519 fixed blade, and the return of the classic Cuda one-hand opener. All have AUS-8 blades with a black Carbonitride Titanium coating that wears like iron.

It is starting to seem like there is an SOP for any old-line American cutlery brand when they are forced to close their doors. First, the factory and all its equipment are auctioned off, eliminating any possibility of the original manufacturing facility reopening. Step two, someone buys up the brand name with its assorted trademarks so that they can be used on a new line of cutlery manufactured “off shore” (normally code for mainland China). Controversial as this might be, there is often a silver lining to starting with a clean slate in another country. The reborn company can be much more flexible about offering innovative new designs without the years of development time common in the past to the inflexible New England companies. 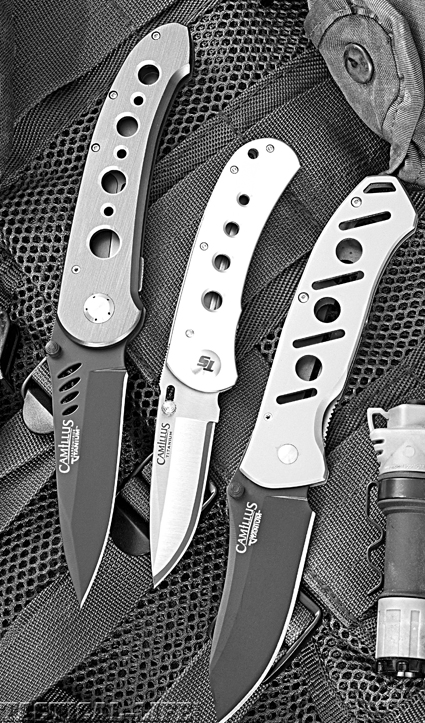 Left to right, the Camillus M18514 folder, the replaceable edge M18563, and the M18513 folder. I carried this last model for a couple of weeks as my EDC and found it to be very practical.

Acme United
The reorganized Camillus Cutlery is a classic example of this trend. When the 100-year-old cutlery maker closed its doors, Acme United/Clauss Tools, longtime maker of scissors and shears, acquired the brand and set out to reestablish it as a leader in its field. With only a few rare exceptions, the old Camillus knife line of traditional folding knives is completely gone. What many probably don’t realize is that Camillus branded knives always were a small part of the company’s output. Most of their production was devoted to manufacturing other cutlery seller’s products. The closing of the New York factory gave several companies no choice but to also contract their products out to Chinese sources. 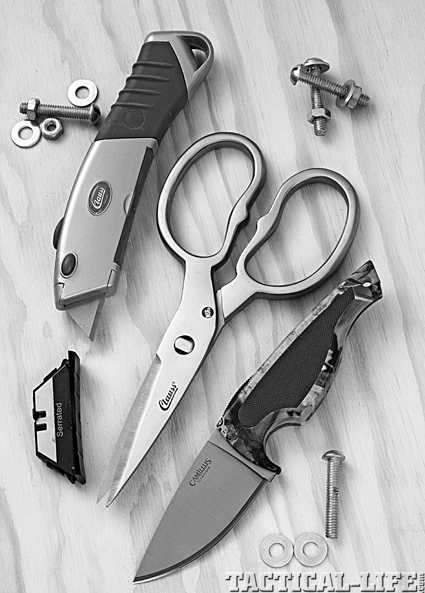 When Acme sent TK a cross section of their line for evaluation, I had to find logical ways to field test each model. In the past, we have had a patch of very invasive, small diameter bamboo, growing on one side of our yard. Its only saving grace was that every spring it made good garden stakes and row markers. So this year my wife decided to declare war on the patch with fire, chemicals and pruning shears. Time will tell if she has actually won the battle but it did mean I needed to find another source of garden stakes for the planting season. What I ended up doing was lopping off a number of long, thin hazel suckers with a machete (ESEE Lite model), cutting them to length with a pair of large limb pruners, and then whittling points on all of them with the Camillus Model 18537 4-1/2-inch drop-point hunter fixed blade (suggested retail $69.99) included in the test group. Eventually I had cut points on 90 stakes without resharpening the knife. Not bad! A few quick passes over a diamond rod had it back to factory sharp.

Coating & Handling
Like all of the new models, this knife has an AUS-8 stainless blade with a black Carbonitride titanium coating. Frankly, I tend to take all new super coatings with a grain of salt because few will actually hold up under hard use for any length of time in the field. While it may not be the same as digging a foxhole with your knife, my stake-making project did not seem to phase the coating on the Camillus. Another point about extended whittling projects like this is that you soon form strong opinions about the comfort of any particular handle. Most handles will probably be OK for a few minutes use but work with it for an hour or two and you may find yourself flat out hating it! I was pleased to discover the handle on the Camillus hunter was extremely comfortable from start to finish on the project. 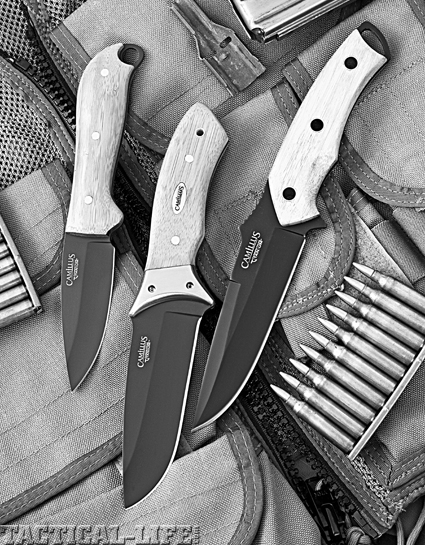 The handles on all of the Camillus fixed blades are bamboo, a material that seems to be especially popular with the “green” set right now. I’ve been told it is both very durable and that it is a “renewable” resource. Sorry, but as an old forester, I consider all trees a renewable resource! You just need to preserve the space to grow them rather than build another super “box” store on a 50-acre parking lot next to a 500-home subdivision.

Anyway, given the handle didn’t show any signs of wear from my stake making, I thought I would see how it held up to moisture by soaking it in a bucket of water over night. Our local wet winter monsoon rains followed by low humidity summers can be very hard on some natural wood handles. My goal was to see if the bamboo swelled and then shrank when it dried. I repeated the soaking and drying test three times just to make things interesting but found no real change in the handle’s condition. 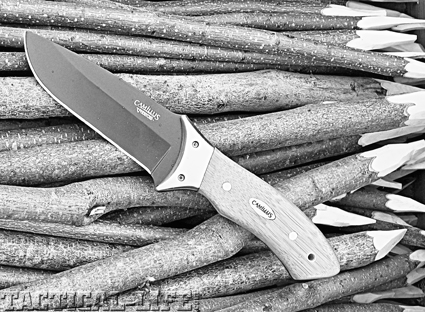 The first task I put the Camillus Model 18537 to was whittling points on 90 hazel garden stakes. The AUS-8 was still working sharp at the end of the project, making me believe this would be an excellent knife for any big game hunter.

Tactical Survival
Camillus’ version of a tactical fixed blade, the Model 18506 (suggested retail, $58.99) proved to be one of the more interesting options in the line. At 5 inches in blade length, it falls into the “pilot survival knife” category of cutting tools. Large enough to be a serious weapon if need be but still light (8 ounces in the sheath) and compact enough to be easy to carry in tight spaces. As with the first sheath knife, the handle is bamboo. The 3-3/8-inch-long false edge is not sharpened but probably could be without too much trouble if the user really needed that option. While this isn’t a heavy-duty chopping and prying kind of a combat knife, it should be well suited to most normal cutting chores a soldier encounters in the field. 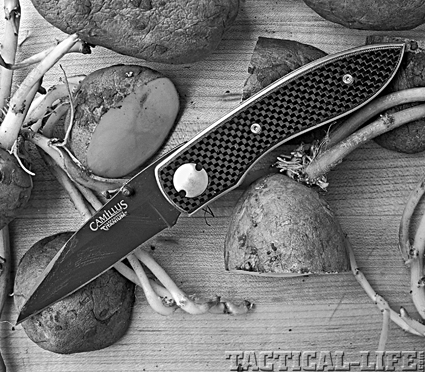 Probably my only real complaint about either of the fixed blades is that the nylon sheaths were not of especially good quality and seemed too lightweight for extended field use. I have long held a personal belief that it is better to have an inexpensive knife in a high quality sheath than the finest custom around in a scabbard that might endanger the user or lose the tool when you need it most. Camillus should consider upgrading this part of the package. The one positive thing I can say about the scabbards is that they use snaps on the keeper straps rather than Velcro.

Wharncliffe Folder
I’ve never really been a big fan of the Wharncliffe style of folding knife, but the 3-1/2-inch bladed Camillus Model 18519 has gone a long way toward changing my mind about that. The first thing I noticed was this really was the ideal blade pattern for opening boxes, cutting tape, slicing cardboard (I use this many times for protective covering when returning bare blades) and other shipping chores. It also proved very useful for cutting seed potatoes, small pruning jobs in the orchard, and a wide variety of other garden tasks. As with the fixed-blade hunter, I was impressed with the wear resistance of the Carbonitride Titanium coating. It basically looked as good as new after several months’ use and the blade held an excellent edge. 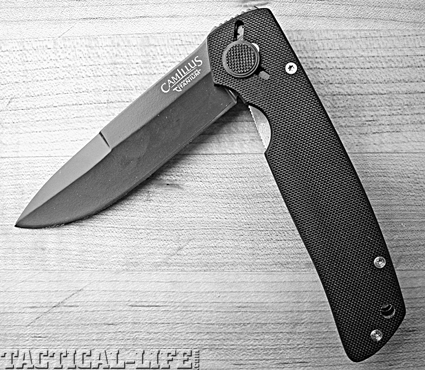 One of the first modern one-hand openers, the Camillus Cuda is levered in to the working position by pushing a button on the side of the handle up a channel cut in the scales. It is actually easier to do than describe.
The Cuda Is Back
One of the few knives remaining from the old New York state Camillus line is a version of the “Cuda” folder. Many of you may remember this was an early attempt at a modern one-hand-opening knife. It is easier to do than explain, but a flat button on the side of the handle is pushed forward through a channel cut in the scales to lever the blade open. The new version has a 3-7/8-inch-long Carbonitride Titanium coated blade on an aluminum frame with G-10 handle scales. Given this system actually had many fans during its original production run, this should be an ideal model to retain in the catalog. Suggested retail, $52.99.

One of the other items included with the evaluation samples was actually not a Camillus product but a heavy duty Model 18518 set of Clauss shears, which I soon found a very good use for. I think these are normally considered “kitchen shears” and they carry an “NSF” food-handling approval stamp. On the other hand, what I discovered they were ideal for was opening all those extremely annoying plastic clamshell packages everything seems to come wrapped in today. A couple of quick snips and most were safely opened with no effort on my part. This is certainly a major improvement over trying to cut them open with a knife!

Camillus has many other practical everyday working blades in the new line that will be equally welcome to knife users. The King may be dead but “Long Live the King!” 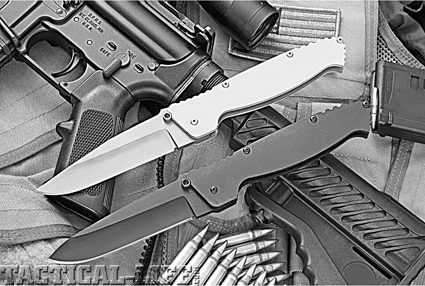 Entrek-USA’s Counter and Strike Point folding knives are industrial-strength and ready for any call...