My wife and I were driving south on US 31 toward the community of Petoskey when a screech of tortured tires in the northbound lane right next to us sent a sharp jolt down my spine. It was a Friday afternoon in July, and the two-lane highway was bumper-to-bumper with tourists fleeing the cities to spend a weekend in northern Michigan’s four million acres of public forest.

The reversed image in my side mirror revealed a late-70s Ford LTD sedan, brakes locked and tires smoking, skidding sideways toward an adjacent driveway in a desperate attempt to avoid crashing into the line of stopped traffic ahead. The driver succeeded in missing the other vehicles, but his own car slammed broadside into the drive’s molded concrete curb. I watched in horror as the big car rolled slowly onto its side like some great wounded beast, its exposed underside looking almost nightmarish. The Ford continued over, falling hard onto its roof before sliding to rest in the deep grassy ditch.

My wife Jacque had watched the accident unfold through our truck’s back window, and I could guess the feelings of deja vu she was experiencing. Jacque had suffered a broken neck from a rollover accident nine years earlier.

I bit off a retort that this wasn‘t my job, knowing it was a losing argument, and nosed my 4×4 into the line of cars in the northbound lane until they parted to let me through. I drove along the highway’s shoulder, parking in the ditch about 50 yards from the stricken LTD. With the truck’s first-aid “jump” kit in hand, I sprinted toward the inverted car while Jacque used our sideband mobile radio to call a local base station operator, who then called the Fire Department from his home (no 911 service in that area in those days).

I would’ve been smart to grab the fire extinguisher too. From 100 feet the air was already thick with fumes from evaporating gasoline—gallons of it. As I drew closer, I could plainly smell and hear gasoline sizzling as it leaked onto the car’s hot exhaust pipes.

I reached the passenger side first. A thirtyish man who had been a passenger in the front seat was yanking forcefully against the right arm of a plump young woman who was suspended upside-down by her shoulder belt. The driver was lying on his belly inside the opposite window, where he was pulling on the poor woman’s left arm. Neither man appeared to understand the lady’s repeated complaints that she was stuck in her shoulder belt, unable to reach its release button… 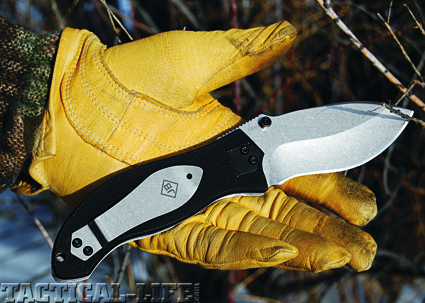 Don’t be fooled by the name Mini-Resurrection; this custom-designed folding knife is a monstrous...