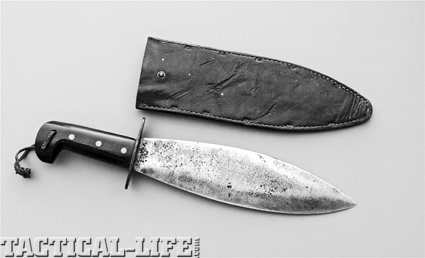 The author’s OSS Type I “Case” Smatchet shows tarnishing on the bright blade and the sheath is missing the retention strap, but it is a very scarce blade.

Although W. E. Fairbairn is most often associated with the dagger that bears his name along with that of E. A. Sykes, he was also a great believer in the effectiveness of the “Smatchet.” Fairbairn taught seven basic techniques with the Smatchet—thrust deep into the stomach, saber cut to right of neck, saber cut to left of neck, smash under the chin with the pommel, smash down into the face with the pommel, saber cut to the wrist and saber cut to the arm. He instructed an array of WWII special forces, including the Commandos, Rangers, OSS and SOE. It is always interesting to read OSS memoirs as virtually everyone mentions him. Bear in mind that many during WWII felt that OSS should stand for “Oh, So Social” rather than Office of Strategic Services. This was based on the number of Ivy League men and Seven Sisters women recruited into the OSS. For these children of privilege, the quick course in up-close-and-personal killing they received from Fairbairn deeply impressed them and saved a few from death or capture during the war and from muggings after the war.

Fairbairn’s influence on the OSS was apparent in both the adoption of the OSS Stiletto, which was of F-S design, and the Smatchet. I have to admit, however, that though I have read numerous OSS memoirs of Fairbairn and the Stiletto, I have not found one that mentions the Smatchet. Nevertheless, there were OSS Smatchets of at least two types.

Smatchet Production
The Smatchet resembles the traditional bolo to some extent, though John Brunner in his book on OSS weapons also compares it to the Roman gladius and the machete. I have also seen it compared to the WWI Welsh trench sword as well. According to John Brunner, the first OSS record documenting a possible Smatchet order is dated July 3, 1942, and mentions ordering 20,000—half to be sent to England. Early bids to produce the Smatchet were received from Landers, Frary & Clark, who had made the OSS Stiletto, and Ulster Knife Company. Eventually, 29,000 Smatchets were ordered for the OSS from Ulster Knife Company at $3.50 each. However, various changes delayed production. 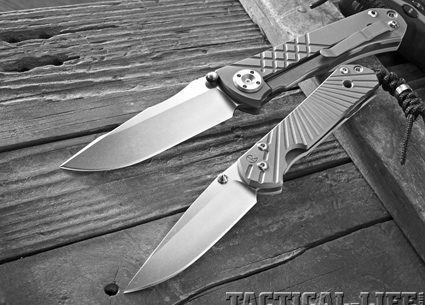