I’m a chopper guy. I know, I know, I’ve heard all the technical arguments that a cheap machete is more efficient in softer woods and brush or that an axe or hatchet chops quicker on hard woods. However, there’s just something about holding a big, thick monster of a blade that makes me want to hit the woods, build a shelter and baton some firewood. I also like the idea that one tool can “do it all,” even though we all know that’s a pretty tall, almost unattainable goal. So the first time I saw the Chris Caine Scorpion Survival Tool, I knew I needed one. I love unusual and the Survival Tool has that wrapped up in spades. 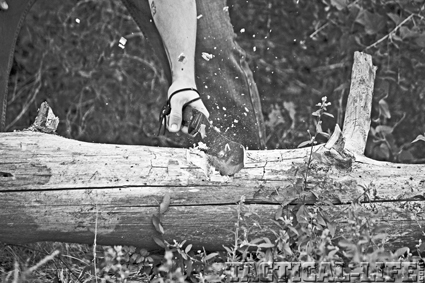 Of course the Survival Tool could chop. Make contact with the “sweet spot” and the chips flew, easily keeping up with a hatchet and burning right through soft pine.

Survival Background
Chris Caine, the designer of the parang-inspired knife, is a man that knows what he preaches. Chris is an accomplished British survival instructor, but that title only really scratches the surface of the depth of knowledge that this fellow holds. Chris doesn’t just practice the trade, he lives it. For the past 15 years Chris has lived without a typical home, traveling from woodland to forest, living off the land and honing and perfecting his craft. 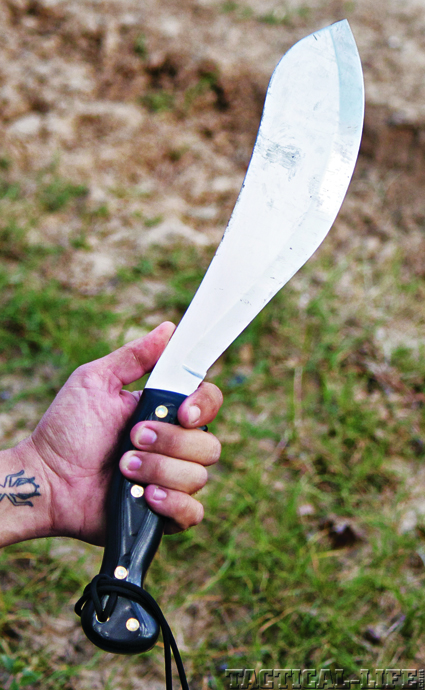 The curvaceous handle allows for a variety of different grips and enhances the tools capability. The generous choil allows for a high grip.

My first conversation with Chris lasted well over an hour on the phone and left me nodding my head at the “sacred cows” of survivalism that Chris could so logically disassemble and disprove, and we became fast friends. He started his quest at the age of seven under the supervision of his father, a British Special Forces survival instructor. In the early 90‘s, Chris was introduced by his father to fellow SAS instructor John “Lofty” Wiseman, who helped Chris shape his skills and start Trueways Survival School.