0
SHARES
15
VIEWS
Share on FacebookShare on Twitter
Chris Reeve’s Umnumzaan and limited edition Wilson Combat Star-Benza have set the standard for how top-of-the-line tacticals should be produced. While this level of performance may not come cheap, many of us consider it worth every penny!

It wasn’t long after the March 2011 Tactical Knives hit the stands that I received a phone call from Chris Reeve. Some of you will probably remember that was the issue in which I reviewed the Wilson Combat “Star-Tac” folder. As most knowledgeable knife people know, this model is really a special order version of the Reeve “Umnumzaan” (Zulu for “sir,” “mister,” or “boss”). Among other things, some questions had been raised about my statement that the Star-Tac/Umnumzaan was a second-generation version of the legendary Sebenza folder. Chris was quick to back me up on that point and explained that he felt he had incorporated a number of refinements to make it an even better cutting tool.

What he was less than pleased with were my comments about having difficulty opening the Star-Tac with one hand. While the knife has ambidextrous thumb studs, there is just a little more clearance between the frame and the thumb stud on the right side. The difference might not have seemed like much, but it was enough to give me some problems with one-handing the blade with my left paw. 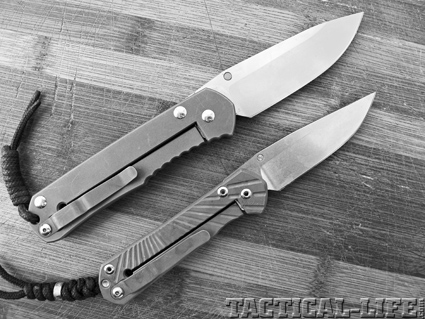 The top knife is an older, standard-size Chris Reeve Sebenza that I have used for some time. The smaller knife is the new Wilson Star-Benza, their limited edition version of the small Sebenza. Ask five users what the perfect size for an EDC folder is and you get six answers. The Star-Benza is ideal for those who require a sub-3-inch bladed knife to meet legal requirements or simply don’t wish to carry a heavier duty bolder.

Knife Opening for Dummies
Because he has had to explain the proper method of opening the knife to many customers over the years, he thought I might also need some “tutoring.” After some discussion of the situation, Chris decided it would probably be best if I just tried one of his left-handed versions of the Umnumzaan. A few months later, a box showed up with what you might call the reverse image of the Wilson Star-Tac I had originally used. 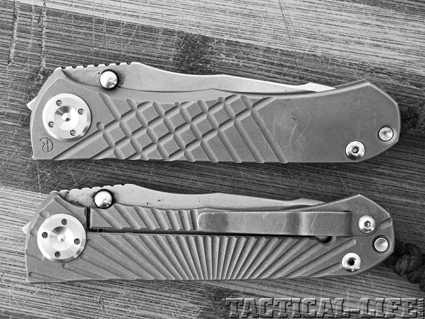 A left-handed Umnumzaan (top) and the right-handed Wilson Star-Tac (bottom) that started the debate. While it may not seem like much, the small amount of clearance around the thumb stud on the top knife made it much easier for me to open left-handed. The projection on the end of the blade tang on both knives is a window breaker.