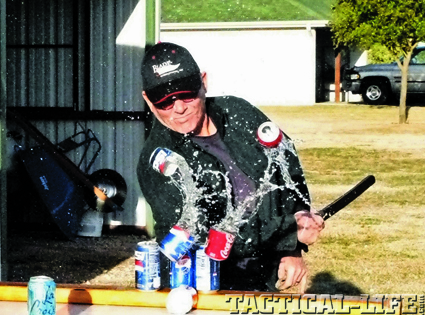 Warren Osborne not only makes a mean knife, he competes as well. He is shown here cutting cans full of water.
Comment(s)

There is no telling when the first cutting competition took place. Perhaps it was two cavemen sitting around the opening of a cave competing with stone knives to see who could dress a giant ground sloth the fastest. As the technology of metallurgy evolved from its infancy to the high state of science it is today, this same scenario has been played out countless times. Ever since man has had blades, there has always been a natural instinct to see who could come up with a superior edge and use it the best.

The art of cutting is being advanced to a fine art today, thanks to a non-profit orga­nization called BladeSports International, headquartered in Waxahachie, Texas. Waxahachie may not be a large city but it does lay claim to being the home of a highly accomplished custom knifemaker by the name of Warren Osborne. Warren has been involved in BladeSports since its inception in 2005 and only recently retired as the organization’s executive director. According to Warren, “The purpose of BladeSports is to promote cutting competitions in a safe and friendly manner. We hold eight or nine competitions a year with a champion being crowned annually at the Atlanta Knife Show.

The roots of BladeSports cutting competitions date back to around the turn of the millennium when the Oregon Knife Collectors Association held informal cutting contests at their annual show. The ABS (American Bladesmith Society) became involved and elevated the competition to a higher level that led to an annual cutting competition at the Atlanta Blade Show. In 2005, at the suggestion of a knife show promoter, BladeSports International, Inc. was formed and later turned into a non-profit organization by Osborne, Gayle and Hester Bradley, Gary Bond, Scott Devanna, Daniel Winkler, and Steve Singer as its board of directors. Jose Diaz recently took over Osborne’s role as executive director.

The Cutter’s Gauntlet
A cutting competition combines the raw energy of human strength, state-of-the-art steel and a highly trained mind. At a BladeSports event the cutters have to go through a gauntlet of stations where different challenges await. The battery of items can vary from one event to another but a typical contest includes rope of all types, water bottles, soft drink cans, balls, dowels, paper, cardboard tubes, paper towel rolls, stick bundles and even wood 2×4’s.
According to executive director and competitor Jose Diaz, “A usual cutting competition will have 10 stations. Each station is worth a set number of points. The course itself is timed. There are usually 10 individual cuts that start at the 2×4 and end at the other side of the 2×4. There are usually two to three rope cuts, a rolling tennis ball or rolling golf ball cut, a hardwood dowel cut, a ¼-inch cardboard tube chop, a cardboard mailing tube slice, water bottle, pop can or milk jug cut, and some kind of drinking straw cut. These vary from a flick to slice off the straw above the corrugation or slashing the straw from top to bottom in one clear cut. There have been some cool novelty cuts, like the tatami mat, or a gummy bear or a golf tee that was to be cut in two, or a cigarette paper to be cut lengthwise while held in a paper clip.”

As you can see from Jose’s comments, not all cuts are power cuts—some are geared toward testing the precision of the cutter. The best cutter is not always the biggest or strongest competitor. Training and technique can trump sheer brawn. 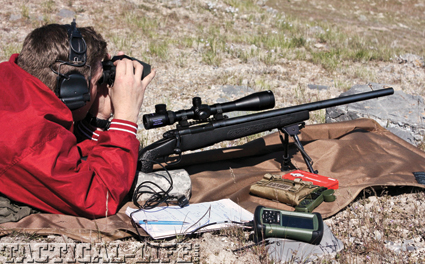 There is no telling when the first cutting competition took place. Perhaps it was…