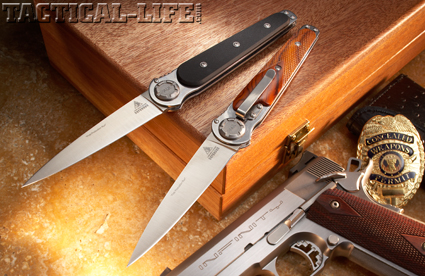 Terrill Hoffman tells me I’m expecting too much from the new crop of cutlery writers when I expect them to know anything about the knives that came before Sal Glesser “invented” the one-hand opener. After all, most of them were just kids when the now legendary one-hand opening hole and pocket clip was introduced by Spyderco. Well, believe it or not, there were other one-hand opening systems before the now universally used crop of holes, pegs, and thumb disks. One classic version is the pivoting button opener first offered by Paul Poehmann in around 1974 as the “Paul Axial Locking Mechanism.” 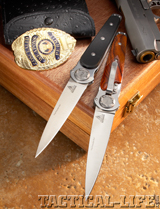 Upscale From The Start
From the beginning, Paul Knives tended to be thought of as upscale gentlemen’s folders offering detailed craftsmanship. These were knives that would appeal to the type of outdoorsman who dry fly fishes in Montana with a split Tonkin bamboo pole. Most of these early custom models were also of a modest size ideal for trout and birds or possibly game up to the size of deer in the hands of someone who knew what they were doing.  This tradition of fine workmanship and marketing to upscale users continued through the period when Gerber began cataloging production versions of the Paul.

When Lone Wolf Knives acquired rights to the Paul lock things started to change. Their first models followed the classic Paul “gentleman’s field folder” lines but, gradually, new, larger models were introduced.  While I have always liked the style of the Paul folders, the updated versions were actually more in line with what I would personally carry in the field. Lone Wolf also started to experiment with what I like to call dress tactical—longer, pointier blades that were practical for serious uses without giving up good looks. The latest model, called the “Paul Defender,” carries this trend to a logical evolutionary stage.

The Defender offers a full 4-inch blade of 154CM stainless steel with a narrow, single edge, extremely needle pointed, dagger-shaped blade. A choice of either checkered cocobolo ($219) or G-10 ($199) handle scales are offered. By swapping the two handle scales and the pocket-clip around, the knife is easily converted over for left-hand use.

Opening Action
For those who have not had the opportunity to open a Paul lock folder, my personal method involves holding the knife horizontal with the blade down and the two sides of the lock pressed between my thumb and forefinger. A quick snap of my wrist and the handle swings around into the palm of my hand. The one thing to remember at this point is that, like many double-action semi-auto handguns, you need to let up on the blade lock button at this point so they can reset. Fail to do this and the blade will probably not be locked in place. Is it easier or faster than the other one-hand systems on the market? I certainly haven’t found it any slower but it does take a certain amount of relearning before it becomes the instinctive action a round hole has become for most of us. There is one minor problem unique to the Defender, compared to other Paul models, the straight tapered sides of the handle require the user to put more effort into being aware of which side the blade folds from. It is fairly easy to reverse the handle in your hand so that the blade will not fold out.

From long experience in the cutlery industry, I know the first thing many are going to pronounce is that this knife is only good for one thing, “sticking people!” I’m going to assume anyone buying a knife called the “Defender” rightfully feels the knife should be suitable for self-defense.  It would also certainly be hard to argue that the shape of the Defender’s blade doesn’t lend itself to deep, easy thrusts. That isn’t necessarily a bad thing, as many so called “combat knives” are actually too blunt pointed for quick penetration when meeting any kind resistance from web gear or heavy clothing.

Perfect EDC Offering
Moving beyond the self-defense capabilities of the Defender, carry the knife daily for a while and you will soon find the blade is actually very useful for everyday cutting tasks. First off, I cut tape and open boxes a lot more frequently than I pull a knife in a self-defense situations. The point on the Defender works great for this. In the spring I gather wild nettles for greens (think real life survival food) and the knife proved equally efficient for this chore. A long, narrow blade like this is a natural for cleaning trout and breasting game birds. To prove the point, I breasted out a couple of Cornish game hens as a rough equivalent of a quail or small grouse with credible efficiency. While I didn’t have a chance to try it, I suspect the knife would make an equally very good boning blade for removing the back straps from deer-sized game.

After you have carried this type of knife for a while, you soon find there a lot more tasks than you first thought for blade with lots of point. What you can’t do is expect the knife to serve as a kindling splitting wedge or a pry bar. Twist or pry on it and you are going to find you now own a much shorter tool.

Defensive Cutting Tests
OK, having established I think the Defender is a much better EDC folder than some would expect, its time to discuss its defensive capabilities. I first soaked a Japanese tatami mat in water for 24 hours. As many of you know, this is the traditional testing medium for katana swords. The mat was then wrapped around a 1-inch thick hazel pole to hold it upright. I then slipped two denim pant legs over the mat. A quick thrust easily buried the knife up to the handle in the target. Without mentioning any names, a well known military style “survival” knife only penetrated about 2-inches with the same thrust. Taking the denim off the target, I tried a straight forward slashing attack. The Defender effortlessly sliced all the way down to the hazel pole, leaving a diagonal cut roughly 7-inches long in the mat. Almost makes you wonder why anyone would bother carrying a sword!

The narrow, tapered handle frame of the Defender lends itself to easy, low-profile carry in a variety of positions. With just the button lock showing at the top of a pocket, I’m not sure most people would even recognize it as a knife. In any case, the Defender would also carry well in a suit coat breast pocket or under the owner’s belt inside the waistband.

G-10 or Cocobolo?
Picking between the G-10 handle and the cocobolo is totally a mater of personal taste. G-10 can probably be said to be more durable but the cocobolo certainly has a very old school look to it. You might say the G-10 would go best with a Glock and the cocobolo with a custom Gunsite .45 auto.

Only having been around a few years now, Lone Wolf is making great strides at filling the gap between the big production companies and the one-at-a-time custom makers. Not many of us may ever own a true handmade Paul folder, but knives like the Defender are certainly the next best thing. 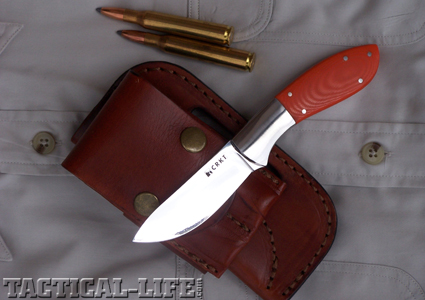 Hailing from Sweden, this little-known steel knife has lots to offer by way of...