Looking out the door gunner’s window, I see the second Black Hawk fly by with its GAL mini guns pointed toward the ground. Its mission is to fly security so our chopper can drop the Jungla Special Operations forces, American agents and me on the ground. Just before the signal came for us to exit the chopper, an American agent dressed in well-worn combat gear shouted above the vibration and high-pitched whine, “These guys hit their targets hard and fast. Keep your eyes open and your head down, and don’t move off the LZ until it’s secure. You’re in FARC territory now!” I was in Colombia to cover a multifaceted war against narco-terrorism, paramilitaries and the Marxist guerilla movement known as FARC. The classified mission briefing had explained there were two labs located in a jungle area belonging to FARC’s 18th Front. We were about to touch down right in the middle of the war on narco-terrorism. 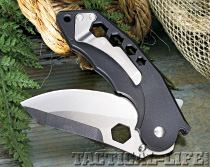 C4 Cutter
Taking down coca labs is hard, dangerous work, but the Junglas operate with the precision of a brain surgeon. Once the LZ was secured, they wasted no time securing the HCL (cocaine) lab perimeter and beginning the tedious work of processing the scene. Coca powder, chemicals and equipment had to be photographed and chemically tested before their destruction. You can imagine the array of cutlery and tools used to cut lines, slit chemical bags and pry open containers. But even with the wide range of knives carried by these operators, they all recognized the name on my pocket folder since many of them carried the same brand of light on their M4.

I offered my SureFire Edge over to one of the Sappers and he gladly accepted by plunging it point first into a new block of C4 explosive. By the time the demo team was finished wiring the buildings, the Edge had cut numerous blocks of C4, trimmed det cord and hollowed out many detonator holes in the explosive compound. When you’re doing demo on a place the size of a large HCL lab, you use a lot of tape to secure explosive charges. The SureFire must have cut a half-mile of the stuff before it was time to pull the pin and watch it all go up in a fiery blast of black smoke. After the smoke cleared, the Black Hawks swooped in and grabbed the operators, since sitting still on the LZ is the most vulnerable place to be for sniper fire or attack by guerilla forces. As the last Black Hawk rose upwards, all that was left was a huge black spot on the jungle floor. Just another day at the office for the Junglas and the American agents tasked with Colombian Anti-narcotics and HVT’s (high value targets).