0
SHARES
7
VIEWS
Share on FacebookShare on Twitter
While Condor Tool & Knife is best known for their camp and field tools, the Toloza is built with tactical use in mind. Its Micarta scales and blacked-out blade give it the look, and its durable 1075 steel blade gives it the capability.

Back on April 4, 2004, Cpl. Samuel Gonzalez Toloza found himself in an isolated compound in Najaf, Iraq, surrounded by elements of radical cleric Muqtada al-Sadr’s al-Mahdi militia. Toloza was part of the 380-man El Salvadoran contingent supporting the multinational forces in Iraq that were providing humanitarian operations in the region. Toloza’s unit initially held their fire against the militia out of concern for inflicting civilian casualties, but eventually they began to fight back in self-defense as more and more of their squad became wounded by enemy fire. 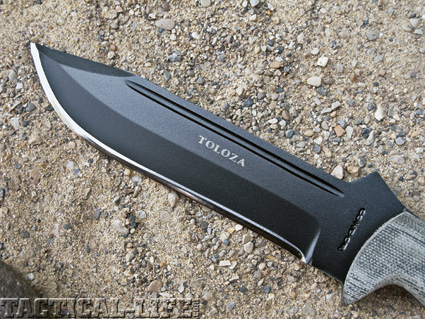 The Toloza’s 6-inch blade features a stout clip point. It has a slight swedge to it but still keeps a lot of material out near the point to resist breakage.

After hours of combat, Toloza’s 16-man squad ran out of ammunition, and one man lay dead with 12 others wounded by rocket-propelled grenades and assault rifle and machine gun fire. With little other option, Cpl. Toloza said a prayer, pulled out his knife and rushed the advancing group of 10 militia fighters. Toloza stabbed numerous al-Mahdi fighters, killing at least one and driving back the rest long enough for his squad to be rescued by an arriving relief column. Cpl. Toloza was later presented the Bronze Star by U.S. Secretary of Defense Donald Rumsfeld for his heroism in Iraq. He is credited with saving the lives of the members of his squad that day. 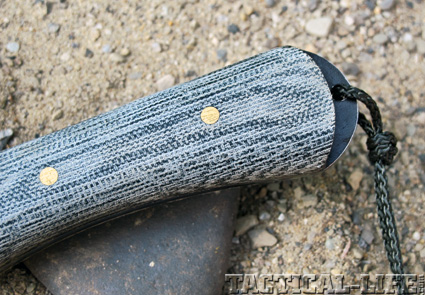 The Toloza features an extended pommel that can serve as a striking surface. It also has a smallish lanyard hole which the author would like to see enlarged so as to take paracord.

Toloza Warfighter
Cpl. Toloza used a folding knife during the Najaf engagement. It was the tool he had at hand and it certainly did the job for him on that fateful day. The folks at Condor Tool & Knife felt that a good sturdy fixed blade would be a more suitable option for that type of use, so they set about designing one in his honor. Tactical Knives contributor and Condor consultant Joe Flowers came up with the design that subsequently became the Toloza.