In the circles I travel, good camp stories are common. Every so often a real survival story comes along that just has to be retold. A few days ago knife maker Scott Gossman called me about a letter he received from a customer using one of his knives to truly save his life. Scott suggested that I contact the fellow and, after hearing about this guy’s experience, I got right to it.

Dave is what could be called a present-day mountain man. He lives in the foothills of the Sierras on the California side. He guides part-time and when not guiding he can be found in the woods hunting, fishing and trapping. His passion is hunting with his hounds, a redbone and two treeing walkers. Dave runs bear in California and cougar over on the Nevada side of the Sierras.

Running dogs is illegal during deer season so Dave uses the weeks in between seasons to get out with his hounds to train. Last September he was out with his dogs in late afternoon. He was traveling unusually light with only what he had in his pockets and one flashlight. Suddenly, the dogs broke and took off after a bobcat. With the night coming on, Dave became concerned, as the dogs had crossed a small river and were headed for the woods that butted up against the highway. He followed, hoping to bring them back before they had gone too far.
Night was falling fast as Dave was looking for a place to cross the river. At one point the river narrowed but the bank was steep. He then spotted a beaver slide and went down to enter the water. There was no trapping permitted in this area but as soon as he hit bottom he felt a tremendous pain at the ankle. Dave had stepped into a 220 conibear and it had snapped behind the heel and up on the shin. He dropped the flashlight and in the dark desperately tried to discover what had happened.

With the water rising and the temperature dropping, Dave tried to open the trap. The jaws wouldn’t budge. Dave reached down and followed the submerged trap chain to where it was anchored around the thick root of a tree that leaned out from the bank. The links were bolted fast. The nut was frozen and Dave had no pliers. He realized he would have to cut the chain. He had a two-bladed trapper pattern folder in the pocket and a Scott Gossman PSK on his belt. The Gossman PSK is a small, straight-bladed knife of O1 tool steel with a 2.5-inch blade and an overall length of 6 inches. Dave’s life was truly at stake. If he couldn’t cut the chain, he could either drown or die from exposure. It was all on the PSK.

Dave looked on the bank for a hammer stone but all were too small. He then felt around in the mud and came up with a stone about the size of an orange. He used the rock for the hammer and the root for the anvil. He laid the edge of the PSK across the link and began to beat the back of the PSK. After less than a dozen whacks, Dave looked to see his progress. To his surprise he had cut clear through the chain and was in the root. He was free.
Dave made it back to the truck where he pried off the conibear. He grabbed another flashlight, crossed the river and collected his dogs. Dave told me that his leg was a bit sore for awhile. The Gossman PSK? A very small ding in the blade, which Scott Gossman gladly restored. 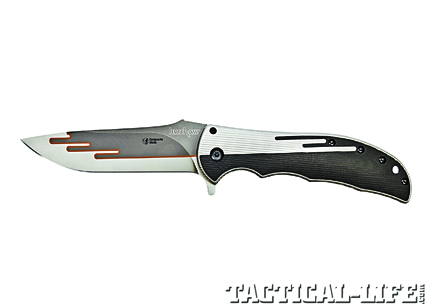 In the circles I travel, good camp stories are common. Every so often a…