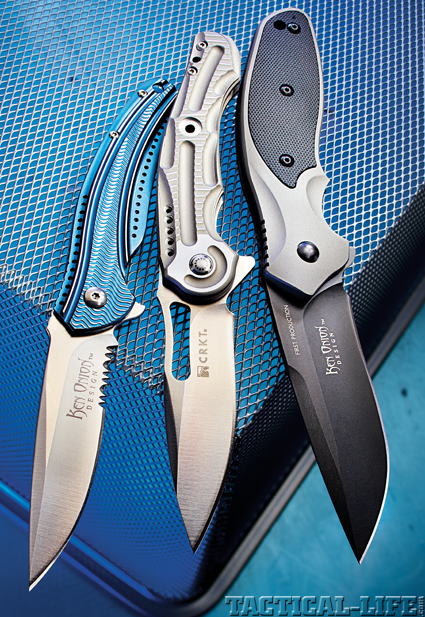 Ken Onion’s collaboration with CRKT has brought about a wave of new designs. With models like the Shenanigan and Ripple, and the Flavio Ikoma Sampa that Ken influenced, the CRKT/Onion team is providing a bountiful harvest of new blades.

Years ago, while perusing the tables at a gun show, I passed a vendor selling knives. There was nothing in particular I was looking for at the time, and I was moving past fairly quickly until the steady “snap-click” sound from the dealer caught my ear. I looked over and the gentleman was flicking a knife open with just the touch of his fingertip over and over again. It stopped me in my tracks and I backed up to see what he had. After a short explanation of the design and him letting me handle it for a minute, he had a sale and I had my first Ken Onion design. It was my first assisted opener and my first knife with a spine flipper, and it managed to make a serious impact on much of my future knife buying and knife use. 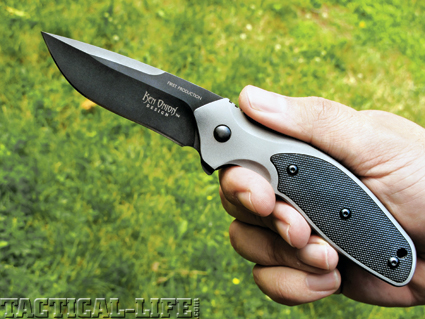 The Shenanigan comes in two models. The Sport model tested here has a black titanium nitrite-coated blade of Acuto+ steel and aluminum handles.

Since that time, I’ve picked up a fair number of Ken Onion-designed blades and I haven’t been disappointed with any, so it was with quite a bit of excitement that I heard about his affiliation with Columbia River Knife & Tool. I already liked Ken’s design a lot, and I’ve worked with a lot of CRKT stuff, so I was really curious to see what they would do together. The answer? Quite a lot! Ken and CRKT have managed to come out with a number of designs in both the fixed blade and folding categories and I managed to snag three of the folders to check out for review and testing. I ended up with the Shenanigan, Ripple and Sampa to take for a test drive. The Ripple and the Shenanigan are pure Ken Onion designs. The Sampa is actually a design from Brazilian knifemaker Flavio Ikoma with some encouragement and direction from Ken.

Shenanigans
Let’s start with the Shenanigan since it’s the most utilitarian of the three pieces. CRKT asked for a series of sport and work folders, and Ken wasn’t shy in kicking out a design that easily met their criteria for a no-nonsense utility blade. I had the Sport model for review and it features a 3.25-inch drop-point blade with a top swedge and slight recurve to it that’s pure Ken Onion. Made from Acuto+ steel and available in either Plain edge or combo edge, the Shenanigan has a high hollow grind and a black titanium nitrite coating. 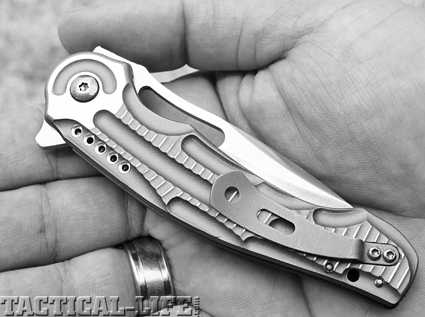 The Sampa weighs in at a feathery 2.7 ounces. It’s truly easy to forget you have the Sampa clipped to the inside of your pants pocket.