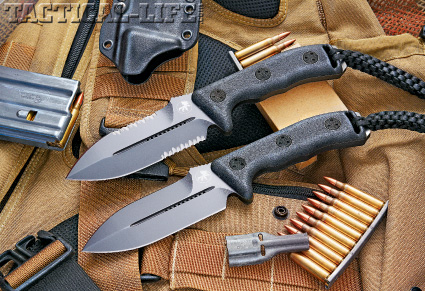 The town of Bradford, Pennsylvania, may only boast a little over 8,000 residents, but what it lacks in population, it makes up for in history. Founded in 1879, Bradford made a name for itself as one of the first oil boomtowns. In 2005 the city received an injection of cutting edge technology when Microtech Knives, Inc. moved from their previous location in Vero Beach, Florida, to the new location in Bradford. In addition to their cutlery line, Microtech also geared up for the Microtech Small Arms Research group and in 2007 began production of the STG-556 at the facility. The STG-556 is an updated and re-engineered version of the Austrian Steyr AUG A1 bullpup rifle. 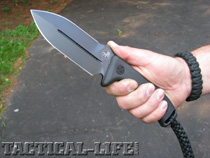 So what does all of this have to do with the matter at hand? Well, in the course of the move, Microtech set up a state-of-the-art facility to build the new STG rifles and MCP pistols and much of that technology translated over to enhanced production of their knives as well. Using many of the techniques and materials used in their small arms production, Microtech’s already solid Currahee Cross Hair fixed-blade knives have been reborn in the new factory. The Cross Hair is a deadly tool suitable for anything an overseas contingency operation can throw at them.

“We Stand Alone!”
The name “Currahee” comes from the Cherokee language and means “We Stand Alone!” Currahee is also the name of the mountain where the U.S. Army trained the 506th Parachute Infantry at Camp Toccoa during WWII, thus the very appropriate motto of the regiment. Microtech felt that their knife so exceeded their expectations that it stood above and beyond what they wanted in a fighting tool. The original design was made for the U.S. Special Forces Boat Team 20 and has been field tested by folks working in some of the toughest conditions to be found.

The Currahee Cross Hair is a short, wide-bladed dagger that reminds me of a modern-day Pugio. The Pugio was a stout double-edged dagger carried by Roman Legionnaires as a backup weapon to their trusty Gladius and Pilum. It undoubtedly served a myriad of utility purposes around camp as well, but its primary purpose wasn’t cutting meat and cheese! The Currahee Cross Hair features a .200-inch-thick blade of S30V steel. The blade is only 4.48 inches long but appears more massive due to the nearly 2-inch-wide blade. The blade is spear-point shaped and sharpened along both edges. It features a deep, but narrow, fuller which is further lightened by a series of 10 holes along the fuller line. For testing, I chose the plain-edged version of the knife, but a partially serrated version is available as well. That one has the serrations on both the primary and top edges. The 5-½-inch handle has plenty of room for large or gloved hands. It’s topped by a serrated thumb ramp along the spine of the blade, and capped in a grooved slot for a lanyard. My review samples came equipped with square sinnet braid, paracord lanyard already attached. The scales are manufactured of the same textured polymer used in the MSAR STG-556 rifles and held in place by three bolts. 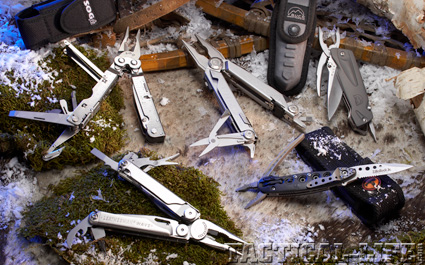 The 1,100-mile Iditarod takes guts, stamina and the right gear. Here are the multi-tools...