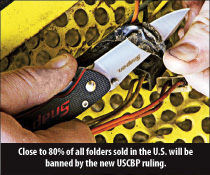 In late May 2009 Homeland Security (formally U.S. Customs) announced they were rescinding their previous approval of the importation of assisted-opening folding knives. While this was disturbing enough, a complete reading of their position proved cutlery users were in far more danger than they might have first thought. Basically, HS feels the real congressional intent of the 1958 federal ban on interstate commerce in switchblade knives was to prohibit any folder that could be easily opened with one hand. The agency has now stated that this gives them the authority to declare all knives that don’t require both hands to deploy “switchblades.” The following is the AKTI’s (American Knife and Tool Institute) stated position on this rule change:

The definition of a switchblade or automatic knife has been clear and explicit in federal law since 1958. There have been several court cases in California, Texas, Illinois and Michigan on the issue of assisted-opening knives. Every judge in every case has ruled they are not switchblades because they do not possess an activating button on the handle. The only exception we are aware of is one Texas appellate case in 2007 and the Texas legislature has agreed with AKTI that the decision was made in error. The court incorrectly focused on a thumb stud on the blade (which is typical of many one-hand-opening pocket knives and is not banned by federal law, in Texas or in any other state). A thumb stud is not part of either the Texas or federal statutory definitions of a switchblade knife, which clearly state that a switchblade must have a release button on the handle.

This case forced AKTI to introduce a bill in the 2009 Texas legislature to clarify the state’s switchblade statute, reaffirm the 50-year-old federal definition, and clearly distinguish one-hand openers and assisted-openers from the entirely different class termed switchblades or automatics. The Texas House and Senate unanimously agreed and sent our bill H 4456 to the governor’s desk for signature on May 29, 2009.

U.S. Customs proposes to bypass Congress and expand the switchblade definition to include all knives that open with one-hand. These include multi-tools, traditional pocketknives, one-hand openers, and assisted-openers. More than 35.6 million law-abiding Americans now own one-hand-opening knives in one of the above four categories. The majority of Americans who carry and use one-hand-openers every day need them for their jobs. They use them to save lives. They use them for gardening and scores of recreational activities.

If U.S. Customs succeeds, they will effectively ban all folding knives from interstate commerce. Individuals who cross state lines into states where switchblades are banned will be subject to arrest and prosecution. To register your opposition to the U.S. Customs’ plan (19 CFR Part 177) to re-classify assisted openers and all folding knives, address your comments to:

Note: On June 10, 2009, U.S. Customs denied AKTI’s request for an extension of the comment period. However, all is not lost! Please reach out to your congressional official by phone or by email in a respectful manner to make your voices heard. Find your official by visiting http://www.congress.org/congressorg/home.

In late May 2009 Homeland Security (formally U.S. Customs) announced they were rescinding their…