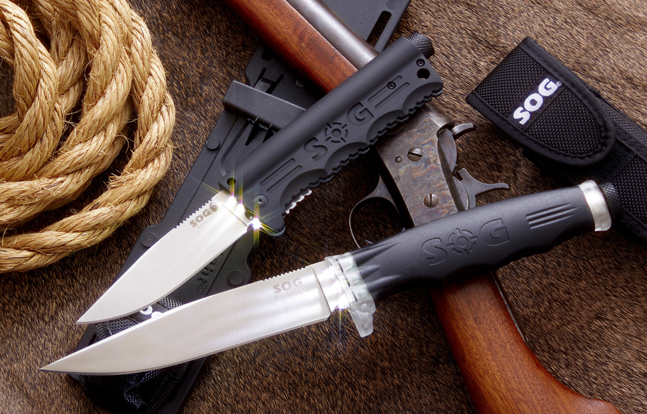 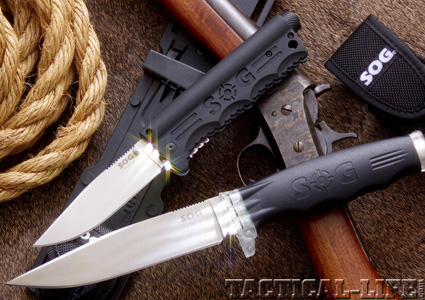 In town or in the field, SOG has a knife to fit your need. They can even light the way with their built-in LEDs.

No one can deny that the economy has been taking a beating in 2012, and many companies have trimmed their product lines and hunkered down with hopes of riding through to better times. However, others have taken a different approach and added new products in an effort to think outside the conventional box. SOG Specialty Knives & Tools is in the latter group and have been introducing new designs since the start of the year. The Blade Lights are an outstanding example of this.

The Blade Light line offers you the choice of either the Fixed (BLT10-K) or Folding (BLT50-N) models, with both having a built-in LED flashlight. The fixed-blade has a 5.7-inch satin finished blade of 9Cr18MoV stainless steel, hardened to a 58-60 Rockwell. The handle is glass-reinforced nylon with a translucent bolster and butt cap. The bolster forms a lower guard and houses six LEDs, with three mounted on either side of the blade. A two-position switch acts as the pommel and is removable to replace the single AA battery. The overall length of the knife is 11.3 inches and it weighs only 7.1 ounces. The folder is fashioned from the same materials, and is a right-handed liner-lock with dual thumb studs. The blade is 3.9 inches, the overall length is 9 inches and the weight is 4.3 ounces. The folder also has three LEDs on both sides of the blade, a buttcap switch, and is operated with two AAA batteries. The light output is 25 lumens for the fixed-blade, and 34 to 37 lumens for the folder. The Fixed knife is supplied with a Kydex sheath and retails for $115. The Folder has a nylon belt pouch and a retail price of $85. Both knives are designed by SOG and manufactured in China.

Many of us have seen the concept of adding a light to a knife before, and if you are like me, you have to wonder about the usefulness of such a combination. We know the value of carrying a good knife. We also know how handy a small light can be, but is the combination an asset, or a gimmick? Too often, when an effort is made to combine products, the quality of both suffers. To answer the question, I thought the best solution would be to test both models as knives, and then as lights. At that point I could have some idea of how well the combination would work out. 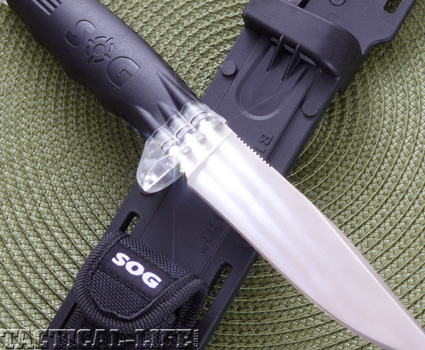 Blade Lights have three LEDs mounted on each side of the blade. That gives you 25 to 35 lumens to always know what your blade is about to cut or where you are about to step. 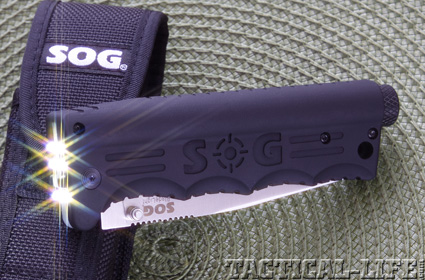 The flashlight feature really doesn’t come into play while handling the fixed-blade knife. The LEDs do protrude about 0.13 inches from the face of the bolster, but other than that, you wouldn’t even notice the light was there. On the folder it is a little different story. The handle is slightly broader than you would expect on a knife this size. However, I did find it to be comfortable and the added bulk wasn‘t noticed during use. The LEDs on the folder are also smaller and hardly noticeable. I used the knives while on a camping trip and found them rather useful as utility blades during the extended weekend. Both knives performed without a hitch and the light feature never got in my way. I was a little tentative right before using the knives for kitchen chores. They had been used to gut and clean fish, and it was time to clean them before slicing meat and vegetables. It doesn’t matter how small a flashlight is, water and electric circuitry just don’t blend well. The literature on the knives claimed an IPX-7 rating for water resistance to full immersion, but I have no idea of what that means. I just cleaned them as I would any other utensil and hand dried them with paper towels. There didn’t seem to be any problem and I considered them good to go. The blades came with a good edge and maintained it during all of my testing. Both knives got a workout cutting small slivers of wood for kindling and various ropes during the camping trip. I have yet to sharpen the folder and the edge on the fixed-blade was tuned-up with just a few passes on ceramic rods. Before trying out the folder, I checked for side movement in the blade and found none. After using it as my everyday knife on the trip and since then, there still isn’t any play in the blade. As is my normal procedure, I never intentionally abused the knives but I also never babied them. When it came time to dig down into the muck along the shoreline for cattails I didn’t even hesitate. 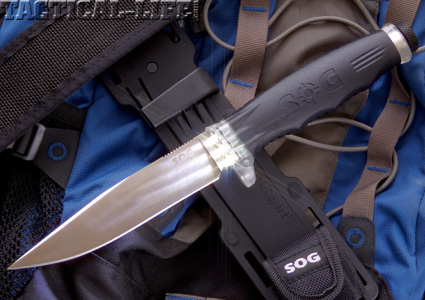 SOG’s Blade Light Fixed can handle your chores in camp or on the hunt. The addition of a flashlight doesn’t take anything away from its abilities as a good field knife.

The sheath for the fixed-blade has a spring clip to be used as your belt loop and enables you to remove the sheath without having to undo your belt. There is also a button retention system on the sheath that assures the knife stays where you put it. Being left-handed, it took some practice to get used to this feature, but that is my curse and the retention system worked as advertised. The folder is too big to be considered a pocketknife, but the nylon pouch carried it well.

Light On The Subject

The other side of these combination knives would be the flashlights. When the sun goes down, man is at a disadvantage and a good flashlight is more useful than you would imagine. Neither the fixed-blade, nor the folder, has lights that could be considered as high-intensity. Their tactical use would be limited, but at 25 to 35 lumens, they do produce enough light for utility purposes. While camping, they did provide all of the light I needed after dark. I can imagine that the knives would be rather useful in field dressing a deer taken at last light. The light did come in handy while fixing a late night dinner around the campfire. The folder could be used either opened or close and worked as well as any other small flashlight. It was the light on the fixed-blade that gave me pause. 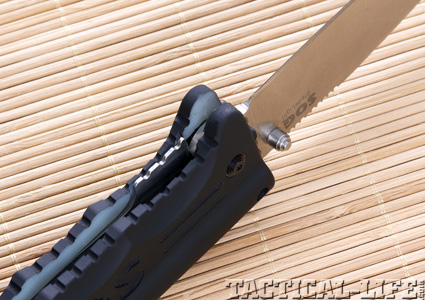 SOG’s Blade Light Folder is a liner-lock with a positive engagement. The blade opened smoothly with absolutely no side play.

During general use, you have the choice of walking around with an exposed blade leading the way, or using the light while the knife is in the sheath. The sheath has slots molded in the Kydex for this purpose, but I found carrying a foot long flashlight a bit awkward. The run time listed is 260 minutes for the folder, and 175 minutes for the fixed-blade. After installing new batteries, I turned on both lights and let them sit till the lights reached a point of exhaustion. The run times were close enough to those stated that just the brand of batteries could account for any difference. The switches on both models worked well, were out of the way for normal use, and as mentioned earlier, water resistant. It was interesting to note that having LEDs on both sides of the blade prevented dead spots in the light pattern.

After testing both the abilities of the blades and the lights, I would say the combination proved to be a useful tool, day or night. As with any new product, the marketplace will determine the demand for such a tool. If you are anything like me, you carry a knife with you every day. At the same time, you also carry a small light with you 24/7. The SOG fixed-blade and folder allow you to have both in one package. 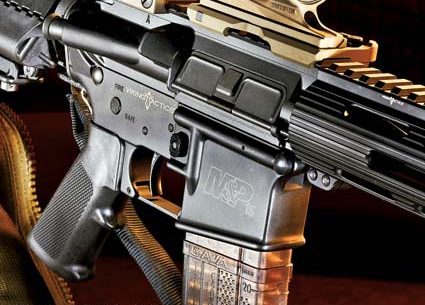 In town or in the field, SOG has a knife to fit your need.…