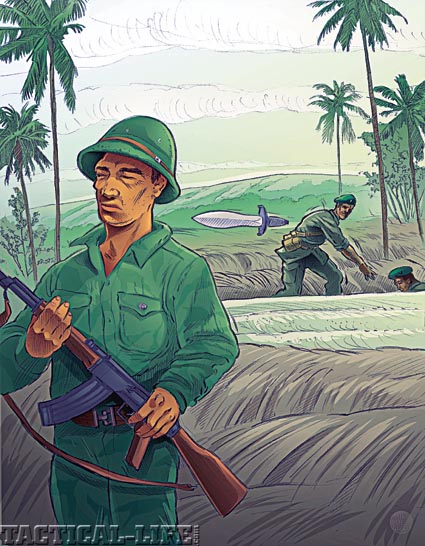 Few Special Forces soldiers can come anywhere close to matching the service record of retired Sergeant Major Jon Caviani. A former Special Operations Group (SOG) team member, a prisoner of war (POW) of the North Vietnamese for over 23 months, Congressional Medal of Honor winner, and an early member of Operational Detachment Delta, he is also a guy that proved the legendary Gerber MK-II dagger was just as deadly as it looked.

The MK-II was originally designed for Gerber by Bud Holzmann, a World War II veteran of the 101st Airborne Division. The basic concept was to correct some of the flaws in the classic Fairbairn-Sykes commando knife and thus create the perfect hand-to-hand weapon. As all collectors know, roughly the first 2,700 knives carried a 5-percent “cant” to the blade and handle that was supposed to position the knife in the hand better for thrusts. This turned out to be more of a theoretical than real advantage and many purchasers thought they had received a damaged knife. From serial number 3751 on the blade and handle were in straight line. While Gerber had hoped to produce the knives on an official government contract, they never received one. Thousands of the knives were bought by individual servicemen out of their own pockets and the knife was especially favored in elite units. Eventually, as anti-military attitudes poisoned the American public, Gerber was forced to add serrations to the blade so that it could be sold in the post exchange (PX) system as a “survival knife.” A number of changes have been made to the knife over the years but it remains the classic combat blade of the Vietnam war.

I’ve read statements from modern revisionist “historians” to the effect that the Gerber MK-II dagger was actually too expensive for enlisted troops to buy and too specialized for any real combat use. As for the first point, in the 1960’s the Gerber sold for under $20 through out the military PX system, about the same price as many of the other popular privately purchased combat knives of the period. While it was designed as a specialized weapon that the average line-infantry soldier might not have needed, I can tell you from first-hand experience the rules were different out on the Ranger and SOG recon teams. Jon Caviani is certainly living proof of that…

In Hans Halberstadt’s book War Stories of the Green Berets, The Viet Nam Experience Caviani gives a personal account of a couple of his own experiences with the Gerber MK-II. The first involved the extremely rare circumstance where a sentry was actually taken out with a thrown knife. As Jon tells it, he was well known for practicing knife throwing in camp but he really wasn’t expecting to need to put that skill to use in the field. The North Vietnamese Army (NVA) sentry was on the far side of a road (Ho Chi Min Trail) and no one wanted to try to cross the open ground to eliminate him. His team leader motioned for Jon to throw his knife and, at first, he shook his head “no.” The team leader again stressed he had to take the sentry out. Calculating the throw, and fully charged with adrenaline, he let fly at the enemy solider. To his relief, the knife buried itself to the hilt in the enemy’s back and the sentry dropped without a sound!

Even in elite units, that one cold steel kill would normally have been the rare exception to multiple tours of heavy combat, but not for Sergeant Major Caviani. His next chance to put the Gerber to work was actually during the same action that he won the Congressional Medal of Honor for. In June of 1971 the NVA over ran Radio Relay Site Hickory north of Khe Sanh and he had the misfortune of being one of its small group of defenders. He was in a bunker when two NVA entered, one unarmed and one with an AK-47. Thinking fast, he stabbed the dagger into the throat of the one with rifle, while his partner stitched the other up the front with 20 rounds from an M16.

A few seconds later the NVA logically threw a grenade in the bunker and Jon decided to play dead, which, given the extent of his shrapnel wounds, wasn’t hard to do. He hid under some cardboard in the bunker but an enemy soldier lifted it to see what was concealed there. Without the slightest hesitation, Caviani drove the Gerber into his sternum all the way into his spine. The only problem was he could not free the knife from the body.

He managed to escape the camp and evade the NVA for another 11 days before a local Viet Cong captured him. As mentioned earlier, he spent 23 months as a prisoner of the communists and received our country’s highest honor for his bravery in the camp. Returning to duty in the states, he became one of the first senior noncommissioned officer (NCO) serving with Operational Detachment Delta. Any knife is only as good as the man behind it and Jon Caviani proved over and over he was one of the best. 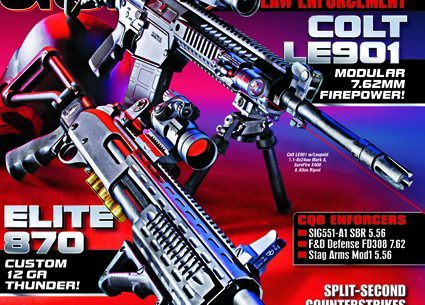