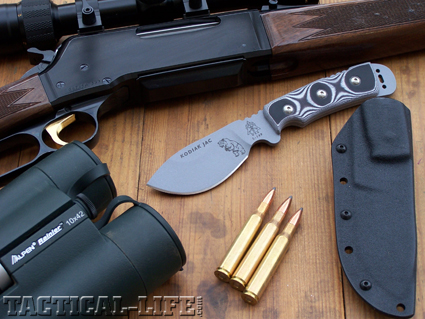 Kodiak Island, situated south and slightly east of Homer, Alaska, covers an area of 3,465 square miles, making it is the largest island in the United States. While the island is duly famous for its outstanding fishing and deer hunting opportunities, it’s the huge brown bears that reside there that have made it a prime destination for big game hunters.

Hunting in Alaska is a serious challenge. The weather is some of the toughest to be found anywhere. And Kodiak Island has its own share of bad weather, including raging wind, torrential rain and freezing cold. Personal safety while hunting on the island is usually determined by your own level of experience and choice of equipment. No one knows this better than Alaska resident and former U.S. Navy SEAL, John Barklow.

This past year John was fortunate enough to obtain a coveted bear license in the annual hunting license drawing. He is patently aware of just how important it is to have all “the right stuff” when you’re afield on Kodiak Island and that includes one’s choice of edged tools.

Island Hopping With TOPS
Since John is primarily a bowhunter, he teamed up with two friends, Eric Lenhert and Tom Loran who carried rifles as a safety measure. Just before the men embarked, Eric had acquired a “Kodiak Jac” (Model KJAC-01) fixed-blade knife by TOPS. Crafted from 1095 high carbon alloy (Rc 58), the knife features a 4-1/4-inch clip-point pattern blade, a recessed choil and a full-length tang. The handle scales are tough G10 in an alternating black and white pattern and the knife comes with a molded Kydex belt sheath. With its clip-point, broad blade and sweeping skinning edge, the knife is a perfect tool for dealing with game care and trophy work.

Two of the best things about this adventure were the prospect of encountering several good bears in the Eagle Harbor area and ready access to a comfortable lodge at Little Eagle Harbor a few miles down the beach, where Tom just happens to be a co-owner. Patient glassing of the valley above Eagle Harbor revealed several bears working the area. One particular animal, obviously a mature boar, stood out from all the rest. According to John: “It was a great bear, but the animal was in a horrible spot to get to. Despite several serious attempts at stalking this particular animal, we just couldn’t get close enough for a bow shot. The old boar would bed down in some thick stuff, which made it impossible to get a clear shot.”

After several failed stalks, on the last evening of the last day of the bear season, John and his “back-up” stalked into a cottonwood bottom and watched the bear bed down. He recalled with excitement, “I couldn’t get any closer than about 65 yards. And that was just too far to try for him with a bow. Having waited for six years to draw the bear license, I really wanted this bear. Left with no solid opportunity to use my bow, I switched to a bolt-gun. When it was all over, it took a total of five well-placed bullets to put the bruin on the ground.

“Eric pitched in and handled most of the skinning, while Tom watched our backs with rifle in hand. When Eric got tired, I took over hide-removal chores,” he continued. “Never once did we have to stop and touch up the Kodiak Jac blade edge. And the knife handle had enough texture so that even when wet and greasy, blade control was no problem. The TOPS Kodiak Jac is the perfect design with the right blade steel for working on large big game, like moose, elk, caribou and bear.”

TOPS Tactical Ops USA has once again created another outstanding knife design. This one is specifically made for those who pursue big game. 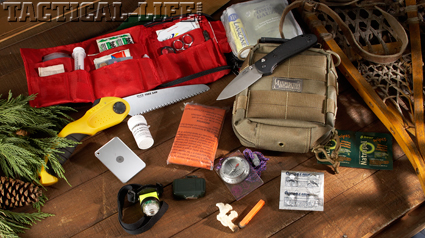