“S.E.R.E” is the military acronym for “Survival, Escape, Resistance, and Evasion.” It is also the term most commonly used when referring to the various armed forces survival schools. In November 2009 issue of Tactical Knives, I ran my own personal evaluation of the Rat Cutlery RC-5, a knife said to have been designed with input from a group of instructors at the Air Force SERE school in Spokane, Washington. As with any military survival knife, I improvised what I thought were reasonable field tests based on my past military combat and civilian wilderness hiking experiences. After all, no sane person is going to intentionally drop behind enemy lines or put himself into a life and death survival situation simply to write a magazine article. Apparently, that isn’t good enough for certain web experts, as the article received a very thorough roasting from several posters.

To start with, I was accused of not knowing the difference between “bushcraft” and a real-deal SERE situation. I’m not sure what the posters think the Air Force trainees do with their knives in Spokane, but from my own research, it seemed to be pretty much the usual start a fire, build a shelter, and skin a rabbit sort of basic skills that have always been taught in survival schools. Theoretical extreme abuse situations are just that—theory. When all you have is a knife, maybe you should stop and think before you ask it to perform a task it wasn’t designed to accomplish.

But let’s go back to the acronym again and start from the beginning. “Survival,” as I’ve pointed out, usually means the traditional wilderness knife skills that don’t vary that much between a combat or civilian situation. “Escape” should probably be broken down between pre- and post-capture. In a pre-capture situation, your best bet is to hide and leave as little sign of your presence as possible. As in don’t cut anything that isn’t absolutely necessary! In a post-capture escape you are going to be lucky to still have your boots, let alone a knife. “Resistance” normally concerns your conduct and mental mindset after capture. SERE schools stress holding on to a positive attitude and never giving up.

But again, no fancy knife is going to help you live through that. Evasion is basically the same in a pre- or post-capture scenario; do everything possible to avoid being found. No fires, no building shelters, no firing shots at game, and stay out of unfriendly settled areas at all cost. In other words, simply become an unseen ghost!

Probably my favorite poster was the anonymous “Rambo” that implied another poster was acting cowardly by suggesting a pilot lost behind enemy lines should hide and hope search and rescue would find him as quickly as possible. To quote: “Why does the military bother to purchase and issue knives, decoration maybe?” I have a feeling he thinks Stallone’s movies are actually Army training films.

I’m not going to say this as a boast, but I spent my time in Vietnam on a five-man, long-range patrol team. Escaping and evading enemy forces was just another day at work for a Lurp. The one rule we lived (or died) by was “Don’t be discovered in the first place.” It takes a lot more than some special knife to make that happen. 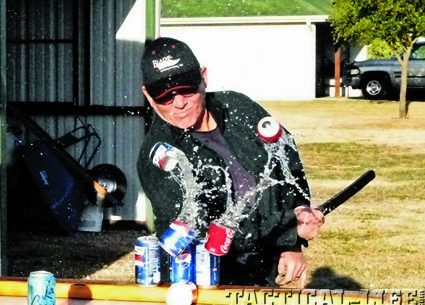 CLASH OF THE CUTTING KINGS

“S.E.R.E” is the military acronym for “Survival, Escape, Resistance, and Evasion.” It is also…