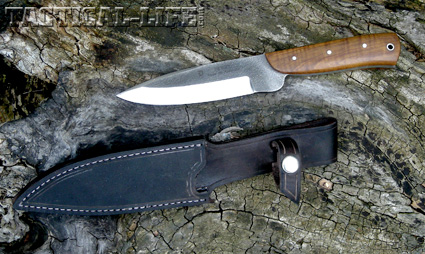 Australian personnel have a reputation for being among the best jungle fighters in the world and special ops units from myriad countries go through the Australian jungle course. Likewise, because so much of the Australian Outback is arid, they are well trained for desert operations. As a result, when I learned of the Dewey Australian Army knife, which was specifically designed for use in desert conditions, I was very intrigued to see what type of combat/utility knife had been chosen.

I contacted Rob Dewey to learn more about the knife and found that it had been used around the time of the First Gulf War. Stores from various Australian Army bases placed orders for the knife and it was issued to troops as needed, including to many deployed for the First Gulf War. The Dewey was on issue with Australian troops for a number of years, though it was eventually replaced with another design.

The Dewey Army Knife is basically a bush knife designed to be extremely durable. The military specifications under which Dewey developed the knife called for a very tough knife designed for camp chores and survival as opposed to close combat.

The Dewey is handmade of 3/16-inch D2, hardened and tempered to 54-56 Rc. It is single-edged and full tanged. Bevels are hollow ground with the original mill finish retained in areas where no metal was removed to fashion the false edge and bevels. This gives the blade a flat finish, which is relatively non-reflective. The grip panels/scales are made from Australian hardwood and are glued to the full tang with heavy duty adhesive and also affixed with three 1/8-inch stainless steel pins. For commercial orders, the Army knife is offered with antler scales as an option. The wood panels get a coat of sanding sealer, followed by three coats of matte Estapol and a final rubdown with steel wool wetted with Scandinavian oil. The lanyard hole is a ¼-inch stainless steel tube.

Overall length of the knife is 9-3/4 inches with 4-3/4 inches of it drop-point blade. A finger guard is designed into the blade and works quite well. The Dewey markings are put on using an electrical chemical etching machine with a stencil. The sheath is of heavy leather construction and retains the knife quite well with friction plus a strap with a snap. Reportedly, some sheaths were made by Peter Clark, who is known for making whips.

Toughness Delivered
The Australian Army wanted a tough, no-nonsense knife for use in the bush, and that is exactly what Rob Dewey delivered. The knife is handy enough that it can be readily carried on the belt. The blade is heavy enough for light chopping but, because it is a relatively short blade, one cannot build up enough force to cut through 2- or 3-inch tree limbs easily. However, in the AO (Area of Operations) for which the Dewey was designed, large trees are not common. Chopping can be done but will take more cuts than with a larger, heavier knife. On the other hand, the Dewey should deal with brush or branches just fine. The point is sturdy enough that it should hold up for light prying and puncturing. According to Dewey, the Army Knife was also designed for digging. The thick tang should be usable for pounding, if needed, as well. I tried doing a few tasks with the Dewey and found it handled prying, chopping, digging and puncturing well. I did note, though, that the cutout fingerguard had a tendency to cause a blister on my forefinger when performing some tasks.

Rob Dewey emphasizes that the Army Knife was not designed as a fighter, but any military knife might conceivably be used in close combat. The Dewey has a sharp point and a sharp edge, which would allow it to be used for slashing or thrusting. The heavy blade should also allow the sharp point to thrust through many layers of clothing if necessary. It’s not a fighter, but it’s sure not a lover. It’s a tough utility knife that can fight if absolutely necessary.

I have seen a description of the Dewey Army Knife that states that it was designed to be nearly indestructible. I believe that. It’s a tough knife for tough troops and it is obviously designed to give reliable service for decades. Another real advantage of the Dewey Army Knife is that, unlike many collectible military knives, it is still available from the maker. I’m impressed with the Dewey’s quality and recommend having a look at Rob Dewey’s website: www.deweyknives.com.au. 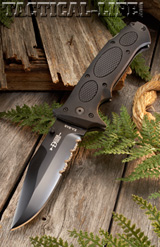