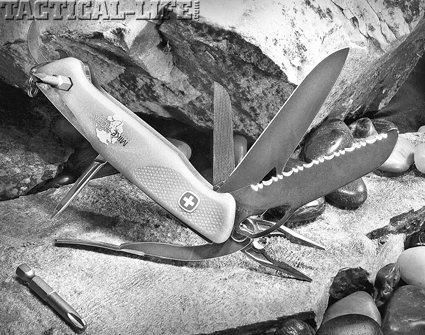 I can remember it as if it were yesterday— 1997 was the year I received my first Swiss Army Knife—the Wenger Traveler. Keep in mind that I am only in my early 30’s.

Jumping ahead to December of 2008, Wenger agreed to a three-year title sponsorship of the Patagonian Expedition Race, a demanding 10-day expedition race covering 375 miles through mystical Patagonia in extreme southern Chile. Wenger agreed to supply Swiss Army Knives and Swiss watches, along with footwear, tents and other camping equipment to the Patagonian Expedition Race, which has become known as “the last wild race!” The official event logo carries the company’s famous Swiss flag emblem.

This knife is actually closely related to the Ranger knife series put out by Wenger in 2007. Its full name is the “RangerGrip 179 Patagonian Expedition Race Knife.” At first sight, it is noticeably an evolution of the Ranger series knives with the added safety grip of the EvoGrip series knives, also of the Wenger family tree.

Pack Leader
Of the three Wenger extreme sports knives received for this article, the Patagonian Expedition Knife is the closest to a dedicated outdoor woods knife. Its large, one-hand-opening 3.9-inch blade has a cutting surface of 3-5/16 inches. All three knives have the same safety lock. By pressing the Wenger shield button, with the thumb, it slides a cam that releases the liner lock. While holding the button down use your index finger to close the blade. This can easily be done with one hand after a little practice.

A saw on a Swiss Army Knife is by far the best feature for a woods knife, in my opinion. This is not your ordinary saw found on the smaller models, or even the larger models offered from other brands’ pocket knives or multi-tools. This is a remarkable 4-inch-long double-cut saw made for eating up even the toughest wood and bone. In a closed position there is about 1/8-inch of steel sticking out of the bottom that makes it very easy to grip with a finger and quickly deploy the saw.

There is a bottle cap lifter, which is often appreciated when one realizes that a great percentage of the world’s beer and soda still require a bottle opener. The length of the flat-head screwdriver/cap lifter combined with the 5-inch length of the handle adds plenty of leverage when used as a light pry. 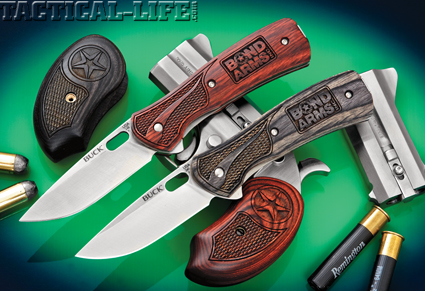