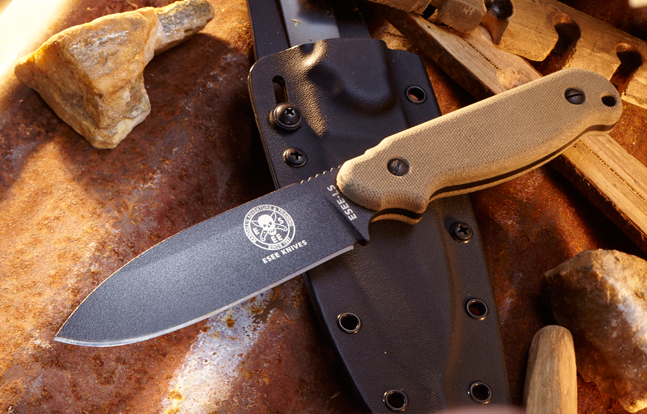 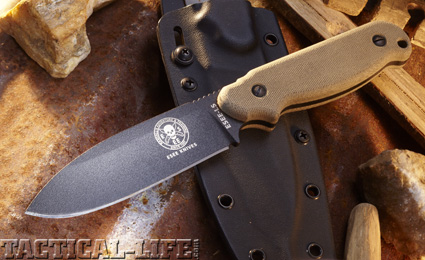 ESEE Laser Strike, made from 1095 high carbon steel with canvas micarta scales. Overall length of 10 inches and made in the USA.

Back in 1999, the Randall’s Adventure & Training group started work on designing a knife that would be named after a late 1990s counterdrug operation in South America. Involving numerous international agencies, including U.S. Special Operations Forces, the operation was named “Operation Laser Strike.” The original Laser Strike, manufactured in 2000 by TOPS Knives, was a fire-based knife kit complete with a ferrocium rod fixed to the sheath. There was a divot on the left side of the scales for a spindle when using a bow and drill. According to ESEE, the raised surface on the handle was harder than the blade, thus the handle could be used as a striker for true flint and steel. The late, great custom knifemaker, Rob Simonich, is credited with being the guru behind this sort of differentially heat-treating process. Well over a decade later, ESEE Knives has produced the new long-awaited Laser Strike made by Rowen Manufacturing.

The blade steel is the heart of a good knife. ESEE kept their tried and true 1095 high carbon steel with a 55-57 Rc for the Laser Strike, and rightly so, it has been a mainstay for about a century of knifemaking. 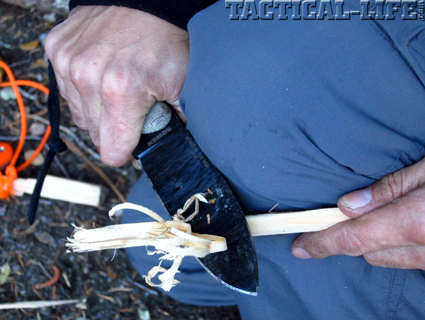 The author using a technique usually done with a machete or large blade. It gives back some control that may be lacking from a near 5-inch long bladed knife and makes it easier to use all parts of the blade, especially towards the tip. REZA ALLAH-BAKHSHI PHOTOS

The blade has a spear-point design and looks like a modern Russell Green River styled knife with a cutting edge 4.75 inches long. Overall knife length is 10 inches. The entire knife is coated with a black textured powder coat. The spine is a burly 3/16 inches thick giving the knife alone a weight of about 9.5 ounces. Natural colored canvas Micarta scales fastened by Chicago screws round out the package, although my prototype for this article featured hex screws. The new Chicago screws should be considered an upgrade for their ease of use and utilitarian appearance.

Uniquely different from the original Laser Strike design, the canvas Micarta scales can easily be removed to reveal a hollow chamber with a small ferrocium fire starter and two tinder tabs. ESEE provides a washer fixed to the sheath, which is ideal for removing the scales, but a flat head screwdriver on any multi-tool or Swiss Army Knife will also work. The ambidextrous sheath is made from black Kydex and has the handle removal washer attached to it.

Measuring in a 4.75 inches long with the ferrocium rod extended, the ESEE Advanced Fire Kit makes a great water-tight survival kit complete with wilderness tips printed on the handle. 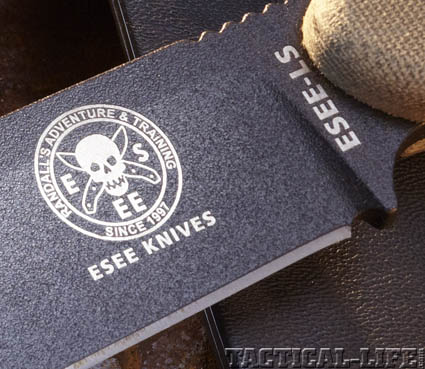 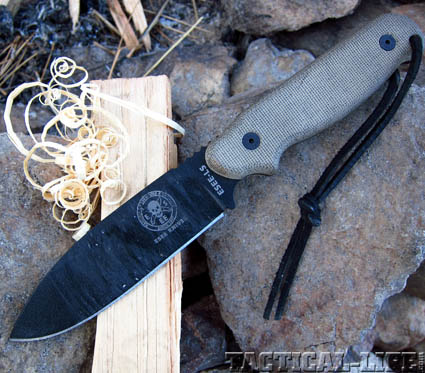 Making good feather sticks out of damp wood is all about having good technique and even better edge geometry. A thin, sharp V grind makes a good wood-working edge.

Real World Use
Winter in the high-elevation mountains of Wrightwood, California is about as real as it gets, it’s cold. While doing a Randall’s Adventure & Training class on the West Coast, those in the camp used the Laser Strike for just about everything from wood processing for fire and shelter to butchering small game. Making shelter in the high elevation mountains of California means making a pine bow shelter, since pine is a readily available material in this location. There was a machete on hand, but most people may not hike with one. However, outdoorsmen will be more likely to carry a sheath knife between 4 to 5-inches in blade length, so we used the ESEE Laser Strike for our shelter building.

First, we located a ridge pole for our super-simple A-frame pine bow shelter. With the help of a stout beater stick, we were able to shear off enough green pine bows to clear the way so we could get to the thicker tree trunk that would become our ridge pole. The work was slow, but we just needed to beaver chew around the tree and weaken it enough to push over. Once the tree was down, choking way back on the handle of the Laser Strike allowed enough chopping power for lopping off the pine bows that would serve as our overhead roof and bedding, leaving nothing to waste. Cold weather can sometimes do strange things to knives, like make the steel brittle. I have read stories of outdoorsmen warming their axes near the fire in the winter to keep the steel from becoming brittle and breaking when they need them most. Luckily, the Laser Strike wasn’t affected by the cold, despite the workout it received.

Fire preparation is almost tied with shelter when it comes to priorities during winter survival. With nearly 5 inches in blade length, the Laser Strike gave plenty of room for splitting wood with a baton. The 3/16-inch thickness made quick work of this task, due to the inherited wedging effect of a thicker blade stock. Regardless of how people may feel about this subject, it is paramount in a winter survival situation when no axe is available. Getting inside the dry innards of the damp wood is only the first stop on the journey of fire making in the winter. Usually in a pine forest fire making is as easy as collecting dry pine needles and a few handfuls of dry twigs for kindling. Add a layer of melting snow on top of the forest litter and the need to shave down wood is imminent.

The Laser Strike has an integrated choil built into the handle allowing the user to get right behind the work when making feather sticks with very little wasted space in the ricasso area. Since the Laser Strike blade is a little on the larger side, it seemed easier to produce good, consistent feather sticks by holding the blade in a reverse drawknife position as one would use working with a machete. In a reverse drawknife position, grip the handle like normal, but pinch the spine of the blade with the alternate hand’s thumb and bent forefinger while pushing down into the wood. Another way of getting back a little control when making feather sticks with a larger blade is to brace the spine of the knife in the soft part of the knee (in a kneeling position), and draw the wood back against the cutting edge of the blade with the free hand. Not just any thick-bladed knife can do this; it must be sharp. Shaving wood with a blade thickness of 3/16-inch is all about edge geometry, and the Laser Strike is no slouch in this department. 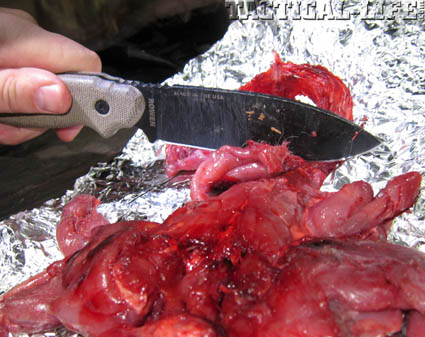 The students of the West Coast survival class 2011; seen here using the ESEE Laser Strike to butcher a squirrel. A stout baton was used to get through the near-frozen bones with no ill damage to any part of the blade.

Food Procurement
Although the initial skinning of our squirrel was done with a small folding knife, the Laser Strike was the camp butcher knife, and quite up to the task. All the heavier work, like cleaving through bones, was done with the Laser Strike. That being said, squirrel bones are not known to be very tough, by any means, but the squirrel had been kept in snow for about two days prior to the butchering, adding some brittleness to the bones. A beater stick was used to pound the knife blade through bones and stubborn cartilage. This is where a bad temper could cause a lesser quality knife to chip. Luckily for us, Rowen did a stellar job on the heat treat.

The blade length and design make the Laser Strike a formidable all-around camp/woods knife for kitchen duty and woodcraft. If need be, it’s good to know it can be pushed into the realm of survival knife and handle hard use when the chips are down!

Fire Starter
Keeping with the theme of new products from ESEE, they have released a new, improved fire kit. The new ESEE Advanced Fire Kit isn’t just a ferrocium rod capable of getting a fire started; it’s also a waterproof mini survival kit container made of aluminum with an anodized finish. The Advanced Fire Kit includes a 20mm Grade A button compass, IR glint tape (USA model only), and visible light reflective tape. As with their previous, smaller fire kit, survival tips are printed on the body. There are lanyard holes on all thread protector rings for attaching a lanyard and wearing the whole kit around your neck, or for clipping onto a carabineer. The kit is about an inch wide and 3.25 inches in length (with the ferrocium rod stored inside). The Advanced Fire Kit weighs only 4 ounces. 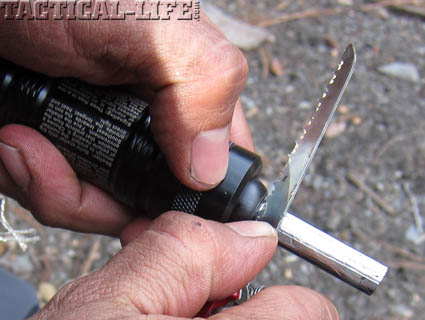 The author easily grips the capsule of the Advanced Fire Kit for maximized leverage when striking. REZA ALLAH-BAKHSHI PHOTOS

The watertight capsule has storage space for fishhooks, line, tinder, and other survival items. I kept the capsule submerged for over ten minutes, and it is indeed waterproof. The ferrocium rod is 3/8 inches thick and measures 1.5 inches long. What I really liked about using the Advanced Fire Kit was the full handle grip I got while holding the capsule, compared to smaller-styled ferrocium rods with an even smaller plastic area (can’t really call them handles) that must be pinched for a secure grip. Having a larger space to hold onto with the capsule of the Advanced Fire Kit results in more control and comfort, especially if using it on hard-to-ignite tinder. The ferrocium rod, as well as the compass, can be used in the out position saving the valuable real estate inside for storage. Two capsules could be screwed together using a thread coupler attachment sold separately from ESEE. 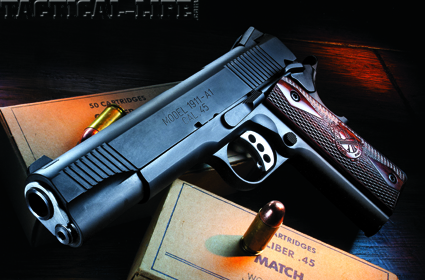 The Springfield Loaded 1911-A1 .45 ACP pistol is a solid duty classic with custom...