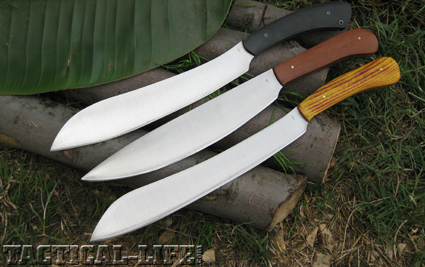 Raised on a farm in Tennessee, David Farmer has hunted and fished his entire life. With an extensive background in the use of knives, both as utility and tactical tools, David has trained in martial and tactical arts for over 30 years. He holds a 5th Degree Black Belt and his weapon studies include 15 years of training in the Philippine arts, which is centered on the stick and knife. As an instructor, David has trained hundreds of students, including police, military, and security personnel in the use of bladed techniques. David Farmer’s knives’ creative influence can obviously be seen from the Asian art of blade making. 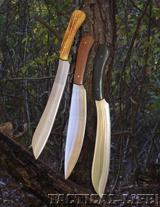 Goloks
In Southeast Asia, there are many names for a cutting tool: parang, barong, dau, bolo and golok, to name a few. The purpose is basically the same—cutting. In reality, the golok is an all-terrain utility tool. It cuts trees, slices meat, vegetables and fish, and is used as a hunting weapon. The golok found its fame in the jungles of Burma during World War II. When the British army led a campaign against the Japanese, this long native knife found many practical uses. The British Special Forces have a similar tool called the Martindale No. 2 Golok. If you look at any three pictures of a golok, you may just as well be looking at three different knives. David Farmer sure has his take on these time-proven tools. I say tools, since many weapons in the martial arts started out as agricultural tools that were forced into the combat realm.

The Golok I received from David is a pure chopping machine. The blade has a very sharp convex edge perfect for heavy work. On most manufactured goloks there is no defined point on the blade but rather an almost squared-looking tip. David’s Golok has a sheep’s-foot type of point, found on some parangs.

A smaller version of the Golok, called the Golok Jr., is available from D. Farmer Knives with an overall length of 16-3/8 inches. The blade on the Jr. is 10 inches with the sweet spot around 3-1/2 inches from the tip. The Golok Jr. has black micarta scales and two hollow pins, which complete the handle. The D. Farmer Golok design has an Eastern flavor that romanticizes its history and the cultures that the Golok serves. At the end of the day, the Golok is a cutting tool that spans centuries.

Farmer’s Klewang
The style of the klewang differs between the various cultures of Indonesia; there are straight-bladed types, but most are curved. The klewang is traditionally a single-edged machete-style sword from Indonesia. In size, weight and shape, it is halfway between the golok and the kampilan. During my talk with David, he let me in on his expression of the klewang. He said his comes from more of a Silat weapons background. “Pencak Silat” is a combative art of fighting and survival that evolved in Indonesia and Malaysia, and the klewang is one of its fighting weapons.

Overall length on David’s Klewang is 15-1/2 inches with a 10-inch blade. The widest portion of the belly is about 1-7/8 inches. The Klewang handle is about 5-3/8 inches long and sports canary wood scales. The D. Farmer Klewang is very reminiscent to the Barong-style machete. There is a very sharp-pointed tip and a big belly in the middle of the blade.

Calling All Choppers
The best part about testing big blades is that it pushes me to do a little yard work that I had been putting off for a while. There is a section of large banana trees out back getting a little on the brown side. Actually, they are almost all dead. I chose the Golok for the task of taking down these 20-foot giants. Normally, they are soft and very easy to take down with any machete or even a knife. In this case, they were dry and pretty hard. The Golok was a perfect choice for the job at hand. The length of the blade made short work of getting the tree horizontal. Once it was down, the real work started, chopping the 10-inch-thick round trunk into manageable pieces for the trash can. I would like to tell you that the chopping went smoothly and the blade didn’t suffer any real wear, but that would be in a perfect world. Actually, the woody banana tree didn’t hurt the edge, but that doesn’t mean the little rocks underneath didn’t. The good news is that David puts a convex on all his blades, which seems to be a tougher edge for contact with hard surfaces. What I thought were chips turned out to be small little nicks that came out easily with a bit of stropping on some 600-grit wet/dry sandpaper.

In preparation for a longer trip, the Golok Jr. went with me on a hike through some buggy, marshy terrain where there was tons of bamboo everywhere. It seemed appropriate to use the Golok Jr. on bamboo—since this was perhaps one of the things it was designed to cut in the first place—I just wanted to stick with tradition. Clearing a small patch that was creeping into a nearby horse trail was first on the list. I spent about 10 minutes chopping bamboo with the Jr. to get a feel for the balance and the best point of contact. My back didn’t appreciate the shorter blade, but that was what I got for taking a shorter blade out for a clearing job. Oak trees are plentiful in southern California and I found some branches that were in need of an attitude adjustment. The oak proved to be a bit harder to chop through than bamboo, but the knife proved up to the task. Needless to say, the Golok Jr. is an excellent blade for chopping green stalks of bamboo as well as branches in the way of the trail.

The longer trip I mentioned preparing for was cut down to a weekend in the San Bernardino Mountains of Big Bear, California. The Klewang was elected to go on this trip as my splitting and chopping blade for a few days. In this mountainous area, there is an abundance of Lodge Pole Pine, which is on the soft side, and Douglas Spruce, which can be a heavier, durable hard wood. First task was to chop the long branches and smaller logs to a suitable size for the fire pit. Only dead wood was collected and used for the campfire. When chopping with the Klewang, I felt confident the blade would stay in my hand without the discomfort sometimes felt in the pinky finger from aggressive parrot beak handles. Once the wood was chopped to size, the splitting started. As with longer blades, the Klewang offers more than enough spine surface area to baton with a piece of wood. It didn’t take long before I was looking at a small pile of split firewood ready to be made into smaller pieces for kindling.

For a well-rounded, camp type of knife, the Klewang is perfect. It is thin enough to slice and large enough to chop, making it the most well-rounded knife of the trio. On all of the choppers I felt the handles could be a little thicker and a bit more rounded for extra comfort while chopping.

Big Blade for Small Jobs
The most common feature on any David Farmer blade is the ridiculously “scary sharp” convex edge. As with most chopping tools, the heavy work is done a few inches from the tip of the blade, which is usually the sweet spot for chopping. This leaves the first few inches (near the handle) very sharp. There are a few ways to use a big blade for small jobs. The first thing that comes to mind is stripping bark off sticks and whittling wood. A little bit of skill goes a long way here. In a standing or sitting position, I was able to hold the knife in an ice pick grip (reverse grip) with the tip pointed down, blade facing away. Placing the knife (tip down) on a stump or downed tree, I simply used my free hand, drawing the stick/wood back against the blade up closer to the handle where it is sharper. This technique makes it easier to strip bark or whittle because I am controlling the smaller, lighter of the two objects.

Sheath Options
David makes a simple fold-over-style leather sheath for transporting and simple belt carry. As an added upgrade, David will gladly send any knife to custom sheath maker Bruce Carpenter. Bruce does a great number of custom leather works for D. Farmer knives, as well as a number of other production and custom knives. 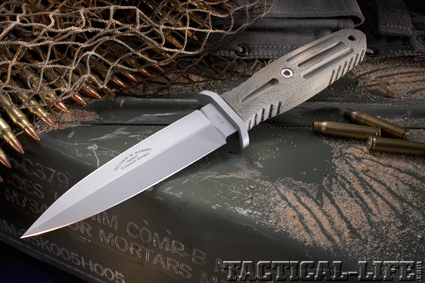 The ultimate “Kill or Be Killed” knife gets perfected by Bill Harsey, the late...