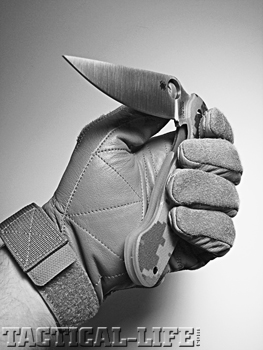 If you carry a folding knife for personal defense, getting it into action quickly should be a primary consideration. Unlike a fixed blade, which only requires a drawstroke to bring it into play, a folder requires two actions—a drawstroke and deployment of the blade. In previous Street Smarts columns, we’ve talked a bit about folder draws and styles of clip carry, so let’s examine the issue of blade deployment.

When I first started carrying a defensive folder in the mid 1970’s, the only way to achieve a one-handed opening was through add-on devices like the Flicket or One-Armed Bandit. Around 1980, the idea of an integral “purchase” on the blade came into vogue and the modern one-handed folder was born. In simple terms, a purchase is any type of feature that allows you to apply manual pressure on the blade—usually with your thumb—to rotate it into the open position. Initially, it took the form of Spyderco’s patented round hole (now still a trademarked feature) and various types of thumb studs. Later, the disk became popular and still later the index finger “flipper” made its appearance. When properly designed and executed, all of these devices can provide rapid, positive deployment of the blade. The trick, however, is evaluating proper design and execution.

Gimme Some Skin?
Two of the first purpose-designed one-handed folders I owned were made by the now defunct Blackjack Knives. Both featured heavily checkered studs that, according to the ads, allowed the blade to be quickly thumbed open. When they arrived in the mail, I gleefully tore open the package and began to experiment with the thumb stud. Within 20 minutes, I had ground a significant chunk of skin off my thumb without ever achieving a quick, positive opening. Later analysis enabled me to understand why those knives didn’t work and helped me quantify the basic elements of one-handed-opener design, which include: direction of force, leverage, length of arc, and purchase surface. 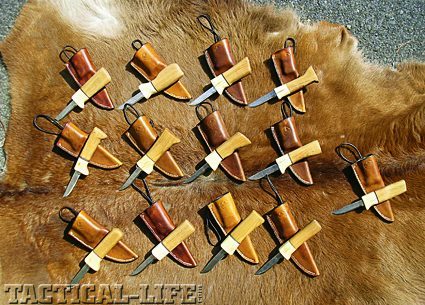 If you carry a folding knife for personal defense, getting it into action quickly…