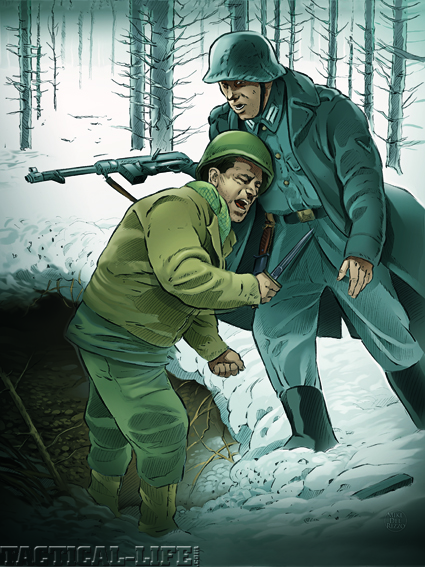 As every infantryman will tell you, it is rare for knives to be used in actual hand-to-hand combat, and even rarer for a soldier to face off against an enemy soldier also armed with cold steel. But Murphy rules the day in every war and the worst always happens to someone. Early in the war, Paratrooper Duff Matson had served as First Special Services Brigade (Devil’s Brigade) Commanding General Robert Fredrick’s personal bodyguard. Naturally, his choice in combat knives was the legendary Case V-42 dagger issued only to that unit and still found on the U.S Special Forces insignia. Matson stated that he carried a knife in each of his jump boots. After General Fredrick commanded the First Airborne Task Force’s invasion of Southern France, Matson was transferred to the 18th Airborne Corp just in time for the Battle of the Bulge.

Matson actually had a long history of rough and tumble knife fights. During the Sicilian campaign, the local Trapani residents had taken to cutting up drunk G.I’s—something that didn’t set well with the paratroopers that had recently liberated them from the Germans. While all American paratroopers were issued a switchblade jump knife, Matson felt it was too small for the job at hand. Visiting a local cutlery shop, he bought a traditional Sicilian-made folder with a 6-inch blade. A small group of Airborne infantrymen then made a night patrol of their own in the dark streets of Trapani. The next morning 4 Sicilians were found dead of unexplained stab wounds and several G.I’s reported to sick call with cuts they had suffered “falling down” overnight. For some reason, the muggings came to an abrupt halt.

Occupying a frozen foxhole in the dark of the night of a snow covered Belgium forest, those warm days in Sicily were only a memory now. Maybe because his main concern was not freezing to death, he didn’t hear the German solider approaching until there was the sound of an MP-40 submachine gun bolt being locked back into firing position. A second later the German pulled the trigger and the bolt flew forward only to land on an empty chamber as the magazine dropped from the weapon. Matson pulled his V-42 from pure instinct and drove the blade into the German right below his belt buckle. The German responded by dropping the submachine gun and drawing his own trench knife. A second later he stabbed Matson in the shoulder, but the knife lodged there preventing him from making a second attack. During the wrestling match that followed the young paratrooper pulled the German’s knife from his own back and stabbed his attacker with it before climbing out of the foxhole.

By this time other German troops were approaching so Matson grabbed two hand grenades, one of which he dropped in his own foxhole with the wounded German and the other he threw at the advancing enemy. A pair of almost simultaneous explosions solved his immediate problem but Duff could not retrieve his V-42 or the German trench knife in the deep snow. When he read the after action report for this night, it commented that there had been a few light firefights and patrol actions but no major enemy activity. Obviously that was totally a matter of perspective!

Case has stated that they only made a little over 3600 of the V-42’s and all were handcrafted by long time straight razor grinders at the factory. Other than a very small number that found their way to the U.S Navy, the majority of the knives were issued to the First Special Service Force. As can be seen by this story, there are a lot of ways for a knife not to make it back from any war. Today, the V-42 is one of the most sought after of WW-II military blades. By Peter Stonehaul

Editor’s Note: We pay $100 for each account we print. Send to the magazine, c/o “It Happened To Me.” Or e-mail to [email protected] 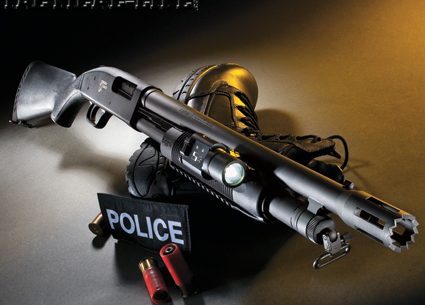