Just ask Jane Fonda; many of us Vietnam vets have very long memories. One of the things that still bothers me personally is how little support the cutlery industry gave the troops in those days. Sure, a couple of the big Northeast companies (both of which are now out of business) happily filled large government contracts out of the general public’s eye. Actually adding real combat designs to their normal lines, on the other hand, was considered totally out of the question, as there was the possibility this would bring down the wrath of the anti-war left. Only one company, Gerber, and its MK-II dagger, stepped to the plate with a dedicated fighting knife for the troops. The MK-II quickly became a legend in Spec Ops circles and Vietnam-period examples are some of the most desirable collector items out there. 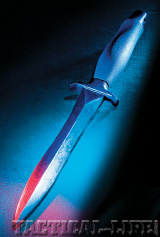 Gerber has continued to give its full support to the troops in the field with a multitude of practical designs right up to the present day. Their Multi-Pliers are standard issue to many military units and I consider their LMF II survival knife one of the best infantry utility blades on the market. I’ve backed up that belief by personally giving a couple to friends and relatives deploying to combat zones.

Newest Combat Partner
The company’s latest example of this commitment to the troops is the LHR (Larsen, Harsey, Reeve) combat knife. Working with former 2nd Ranger battalion hand-to-hand instructor and the head of Modern Combatives, Matt Larsen, custom knifemaker Bill Harsey, and Chris Reeve, Gerber will be introducing what its calling “the MK-II for the 21st Century” at the 2010 SHOT show. I might add, along with his experience in the 2nd Rangers (he made the combat jump into Panama with that unit and also saw action during the first Gulf War) and as the head hand-to-hand instructor for the Ranger Training Brigade, in 2002 Matt worked to rewrite the Army’s field combatives field manual into the present FM 3-25 150. He is currently the civilian consultant in charge of the Army and the Air Force’s combatives programs.