How many languages can you count in? You probably didn’t know it, but if you’re a follower of Mike Grayman’s knives, you can count up to at least two in Indonesian.
Known primarily for heavy-duty fixed knives that favor a military market, Grayman Knives introduced a brawny folder in December 2010 for those who needed “big blade” performance but couldn’t, for various reasons, field a large fixed-blade knife. The Satu provided that performance, and since it was Mike’s first folder, it was simply named Number One, or Satu. Further recognizing that not everybody would find the 9.78-inch overall length on the Satu practical, a scaled down version was developed and introduced early in 2011 and aptly named Number Two, or “Dua.”

Surprisingly Svelte
Considering Grayman Knives’ previous history of solidly built, chew ‘em up and spit ‘em out blades—along with a tendency to not concentrate unduly on absolute cosmetic perfection—the Dua is surprisingly trim in the hand and well-finished. In commenting on that to Mike, he took it in stride, stating that in the past with large knives that were built for large tasks and function was more important than looking pretty—something we both agree on. He also said he made a concerted effort with the Dua to turn out a more refined folder that can still get down to business, and the result shows it. 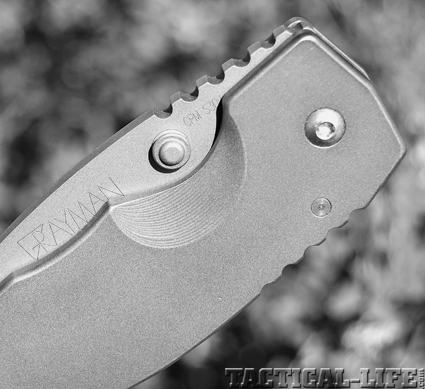 Scalloped lead-in to the stud benefits righties, but left-handers shouldn’t have a problem in opening the blade on the DUA folder.

The Dua is a lightweight 5-ounce folder with a 3.13-inch drop-point blade and an overall length of 7.31 inches, an ambidextrous thumb stud for opening, and a frame lock for locking. There are no liners in this folder, and the blade pivots on ceramic balls with phosphor bronze washers. On top, you see 0.875 inches of large, rounded thumb serrations on both sides of the frame continuing on with an inch of serrations on the blade spine, and on the bottom the finger notch/thumb stud recess is serrated on the right side where the frame is split for blade lockup. There’s a removable pocket clip on the right side also, usable only for tip-up carry, and a lanyard or wrist thong hole through the frame where that clip attaches with three Phillips screws. The two handle halves are connected by three stainless torx screws and the blade stop crosspin. This folder’s open design lets debris fall right on through, and it’s easy to break down for a thorough clean and lube. Although it uses an ambidextrous thumb stud, the left side is scalloped on the lead-in to that stud, a nod to the right-handed majority. 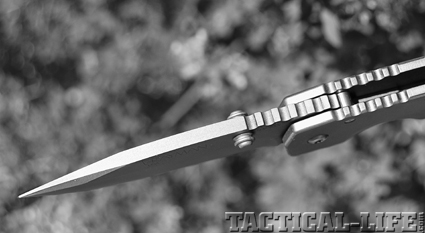 Frame and spine serrations are just right, effective without being too aggressive, and the blade was perfectly centered with no play whatever.