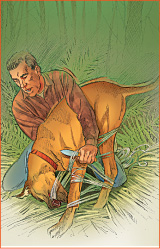 I always carry two knives with me in the woods—one large and one small. For the large knife I tend to alternate between a Cold Steel Bushman and a Bark River SOCOM 7. These two knives are virtually indestructible and give me the confidence to handle any problems that may arise. The one small knife I always carry is the Bark River Mini Canadian. This knife works a lot better than it looks and while technically not a tactical knife, on this day we proved any knife can be a tactical depending on how you use it.

It started out as an ordinary hike with my dog Jake on the Appalachian Trail in New Jersey. It’s a good chance for me to let the dog off his leash. Being a 182-pound Fila Brasiloerp, Jake can be intimidating to strangers, and we’ve been on this trail five times before and have never run into anyone. But this time would be different.

We walked for about two hours, when in the distance I could see someone waving at me. I put Jake on his leash and as I got closer I could see it was a woman. There was a small rise in the trail between me and the woman, so I could only see her from about the waist up. When I got about 100 yards away I could see something lying at her feet struggling and she wasn’t waving just to be friendly. She was waving frantically at this point.

When I got up to her she was crying and I could see the object at her feet was a large Great Dane struggling to get up and walk. At first I thought he broke a leg or got shot but when I got close enough I could see he was completely wrapped up in fishing line. It appeared someone had dumped a whole reel’s worth of monofilament and the Dane was wrapped up in all of it—all four legs, part of his torso and through his mouth. His gums were actually bleeding from him struggling to get free.

I knew I would have to cut the dog out. The Bushman would be big and dangerous for the job, but the Mini Canadian would be the best choice. With its 2.5-inch leaf-shaped blade and lack of a pronounced point I could hack away without stabbing the dog and causing further damage. The problem now was how to actually get cutting.

Even though the Great Dane was a pup he was still huge and probably weighed about 125 pounds or so. He was very scared now and having a stranger trying to sit on top of him made him want to bite. The other problem was calming my dog down, who thought it was all a game. Picture a petite woman no more than 100 pounds trying to control a 182-pound dog while trying to keep her dog calm at the same time and you can get an idea of the chaotic scene.

I started to cut the line from the pup’s legs and as the front legs got free he was trying to stand up and I was losing control. Bad Idea! I then decided to cut his snout free but, of course, this freed him up to bite me. Another bad idea! The good thing is that at this point he started to get very tired and I was able to hack away while holding his mouth closed. The Mini Canadian with its razor sharp convex edge cut through the line with almost no pressure at all. I didn’t nick him once.

Once free he could barely stand because fatigue had set in. At this point I took control of my dog and the lady, who was still upset, thanked me profusely. I told her she needed to carry a knife when she’s in the woods alone for protection and for the occasional unforeseen situation like this one. We said our goodbyes and she promised she would buy a good knife as soon as she got home.

This situation proved that any knife can be a tactical knife—even a pretty one like a BRKT Mini Canadian with red maple burl handles. I think we also proved that not any one knife can do everything. Moral of the story: The right tool for the right job! 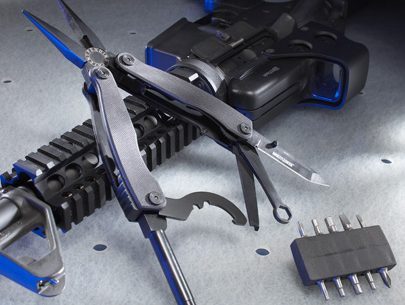 I always carry two knives with me in the woods—one large and one small.…