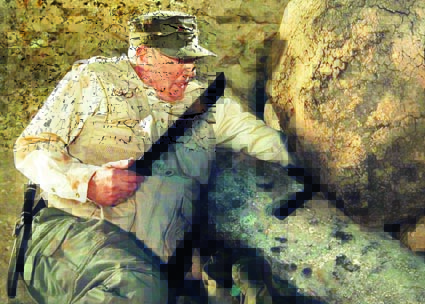 TK: Where have you been travelling?
I’m just back from a trip to the hospital because of a damn tick bite I got while shooting and fishing in North Carolina.

TK: It’s hard to believe the Gunny was slowed down by a tiny tick bite… Are you okay now?
Hell, I’m fine now. But right after I was back from shooting in the Creedmoor Cup matches in North Carolina, I woke up one morning with raging fever and chills. They admitted me to the hospital but at first they couldn’t figure out what was wrong. Finally the third antibiotic took care of it—I bounced back to 100-percent in about another week.

TK: You learned the hard way that the tick-bite threat is very real.
In Carolina, my shooting buddies and I went fishing every afternoon on ponds and a nearby river when the matches were over. That’s when the tick got me. Only about one in a thousand bites do damage—mine was one of them. They carry about 20 different diseases; luckily I didn’t contract Lyme Disease. My next fishing will be up in Canada in a few weeks. The little bastards won’t get me up there.

TK: A tick bite ended up putting you into the emergency room. Did a knife cut ever send you there?
I grew up on a farm in Kansas in a family of six boys. We were poor, so we grew up knowing that if you cut anything short of a jugular vein, you were going to have to fix it yourself. I remember cutting a 3-inch gouge in my leg. It was hanging open, and today it certainly would have sent me for the doctors. But back then we just cleaned it, put alcohol on it, taped it up and made do. No stitches. At my house, unless you were on the verge of death you didn’t go to the doctor.

TK: So you’re back in action then?
I’ll be heading to the NRA Police Shooting Matches in New Mexico. I’ve been with them every year for five years. If I didn’t show up, they would think I’m dead. Many other events are on my schedule. Going here, there, and everywhere.

TK: We don’t get to fly First Class. Is it true they bring you a steak knife for your meal up there big enough to hurt somebody with?
Absolutely. But I can’t bring my tiny inch-and-a-half pocket blade because they’ll take it away from me. Makes no sense.

TK: We hear you’re heading back to Africa.
I’m really excited, just thinking about that trip this summer. I’d like to get a hippo—they kill more natives than any other animal, so if there’s a hippo around causing havoc they’ll make sure we target the right one. I like hunting dangerous game.

TK: Custom knifemakers are mostly honest, hard-working people. But how should a buyer be on the guard against makers who don’t deliver the goods you paid for?
Of course there are crooks in the world, but I don’t seem to find them in knives and guns. Most of the people I come in contact with are patriotic, grassroots Americans. There are a lot of little shops out there, attached to garages, where custom makers apply their skills — some of them after working all day at their regular jobs, many of them retired. They’re a special breed of people, out there pounding on steel and sharpening blades. You have to appreciate the fact that, to them, each knife is a work of art. They’re so proud of their art—their knives—that they’ll stand there and talk to you all day. As a rule, these are very honest people you can count on. These are fine, work-of-art knives, and the customer is almost never paying enough for what went into making that knife—in terms of the creativity and the effort. These are makers who go the extra mile, and you can tell that just by looking at their wares. If you went with me to a show sometime, you wouldn’t believe the pride these guys put into their products. They’ll cut the lid off a tin can with their blade, then cut the hair off their arm with it. In fact, you’ll never see a custom knifemaker with all the hair still on his arm.

TK: A reader asks: “I’d like to get a single sheath knife for all my outdoor adventures—hunting, fishing, camping. I’m looking for one knife that does it all.” What type of blade would you recommend?
One knife for everything? It has to be the machete—the World War II Marine Corps version. It has a sharp point, unlike most machetes, which is good for stabbing when you need stabbing—like when a bear is attacking you. The 8-inch blade is very thick. It holds a good edge and will chop down a tree or filet a fish. You can use the backside of the single-edge blade like a hammer. This is the machete the Marines used all over the Pacific in World War II, so you can’t argue with that sort of performance.

TK: You often advise knife buyers to, “Buy the best steel.” How do we know we’re getting the best steel?
Start with the price. It won’t be cheap! You also consider the reputation of the knifemaker. You look for a blade that is hard, but not brittle. The blade needs to bend, then spring back to its normal shape. How much it should bend depends on the job you want the knife to do.

TK: How can you take rust off a knife that’s been mistreated, like one you find in the woods?
Steel wool and bore-cleaner is one way. The blade may end up being pitted some, but it will still function. Sharpen it up and put some oil on it. All your knife blades ought to have a little oil on them anyway.

TK: What does the expression “Hat Up!” mean to Marines?
Marines have a logical expression for just about everything. “Let’s Hat Up!” means “Let’s Go,” since your cover goes on before you head out. “Making a bird,” means flying out of there. (You can see all these expressions and just about any military history question on askthegunny.com.)

TK: You’ve made 75 movies. Which ones do you enjoy watching over again the most?
The Siege of Firebase Gloria is a favorite, and, of course, Full Metal Jacket. I rewrote part of the scripts in both movies. A lot of people who have seen Full Metal Jacket have missed The Siege of Firebase Gloria, but trust me—it’s worth running down and checking out.

TK: In learning your lines in all those movies, is there a trick to it that might be useful to people trying to learn certain things? Like young people, studying for a test perhaps?
I always studied the meaning of my lines first. Without that, they’re just a bunch of words you’re trying to memorize. I would be in my little cubbyhole, wherever, at 4:00 in the morning and immerse myself in the two or three scenes we would be working on that day. I would study the meaning, then memorize the lines, then write the lines on paper. I would not leave my cubbyhole until I could close the script, and write all the lines from memory. Like, “I am Gunnery Sergeant Hartman. I am your senior Drill Instructor. From now on, you will only speak when spoken to.” Learn the meaning, memorize the lines, then write every line on paper from memory. When you can do that, you’re ready.

TK: It worked for 75 movies. Impressive!
That’s my method. Another thing that motivated me was money. You don’t earn it, you don’t get it. And I knew I could not stand the humiliation of the director calling, “Action!” with a hundred people standing there—the crew, the other actors—as I sit there and blow my lines. I’ve heard the comments the crews make when actors don’t know their lines, and I was always determined to never let that happen to me. 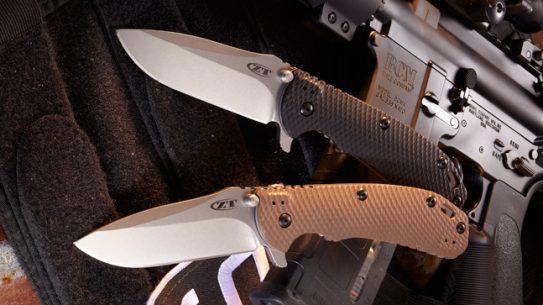 Tank-tough custom knife design by Rick Hinderer for the professional adventurer and warfighter!