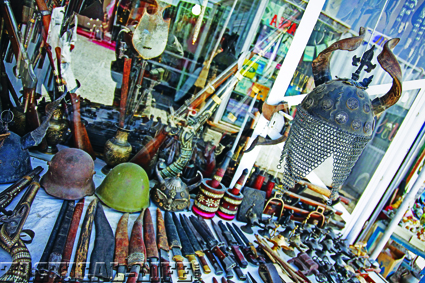 From the looks of things, knife laws are more liberal in Afghanistan than in The Big Apple. Vintage knifes, antique weapons, helmets and knight’s armor are some of the items sold at Afghan market inside Camp Warehouse in Kabul, Afghanistan. Coalition Forces support the local economy by shopping at the Afghan markets inside the base.

TK: Because of critical remarks he made to Rolling Stone about President Obama and his staff, our top general in Afghanistan has been sacked by the President. What was your reaction to General Stanley McChrystal’s sudden dismissal?

I think he should have been fired. In the military, you can’t say bad things about your Commander-in-Chief. The way I understand it, both he and his aides were saying bad things about certain people. I guess they didn’t appreciate the slow way Obama finally came through with the 30,000-troop build-up, and the way he set a deadline—July next year—for leaving Afghanistan, just like he set a deadline with Iraq. That’s stupid. To let the enemy know what you’re going to do.

But General McChrystal was wrong. At his level, when you’re disagreeing with decisions of your Commander-in-Chief, you tell him and his aides and your superior officers what you’re thinking, you try to square him away. But after that, you follow his orders. You don’t tell some magazine or newspaper your opinions. McChrystal completely did the wrong thing, he knew it when they called him on the carpet, and he turned in his resignation.

TK: What do you think of General David Petraeus, who is now taking over the job?
He’s very honorable and respectable, with an outstanding record. I just hope his health holds up. He’s had some issues, and we’re working him to death. I hope he gets lots of help. He’ll do us proud, I’m sure.

TK: In New York City, the District Attorney’s Office has been targeting legitimate, honest knife dealers, accusing them of selling illegal “gravity knives,” which are really conventional, one-handed and assisted-opening knives, which represent about 80 percent of knives sold today. Did you hear about this new attack?

That’s the fall-out of people who have never needed a knife. They have people who do all the knife chores for them—they never have to dirty their hands doing anything with a knife. That’s just one reason they’ll never understand that a knife is a tool. Simply a tool.

TK: Any thoughts on Obama’s managerial skills in coping with the oil spill in the Gulf?

One company has an accident, so now he wants to close down the wells of all the other companies. Does that make any sense? Thank God that we had a Federal Judge who stepped up to the plate. We’re in a situation where the poor people down in Louisiana, Mississippi, and Alabama have already lost so many jobs in the fishing, restaurant, tourism and petroleum businesses. Now here comes our government ready to shut down over 100,000 other jobs. Here were are trying to create jobs in the private sector, and the only jobs Obama has created are government jobs that he has invented.

TK: What do you think about the latest flap on illegal immigration?

Things are really heating up on the Arizona/Mexico border. Eight Republican senators have sent a letter to the White House protesting that they have heard of a secret White House move to have the Department of Homeland Security grant amnesty to all aliens whose visas and work permits have expired.

We did this once when Ronald Regan was in office, and what did it do? The illegals started flooding into this country. And that is exactly what they think is going to happen again. That’s why they’re coming. It’s ridiculous and I don’t believe it’s what the American people want. But they’re going to try to shove that down our throats. We are becoming the only country in the free world that does not enforce its borders. 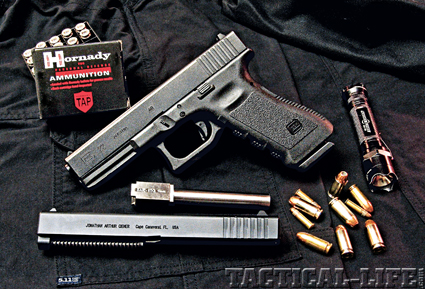 From the looks of things, knife laws are more liberal in Afghanistan than in…