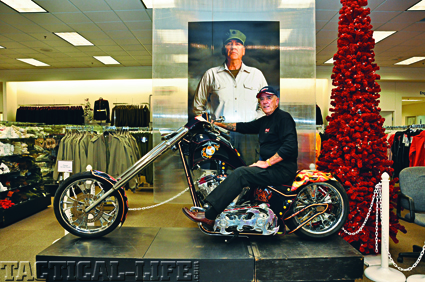 Gunny on his “Marine” chopper that was on display in San Diego, California back in 2009. This is more of a “show” bike for Gunny, his about town bike is a Harley Davidson.

TK: Anything new in front of the cameras?
By now, most TK readers have probably seen or heard my GEICO commercials for TV and radio. I just finished doing four webisodes for WD-40. There’s a lot of humor in them. I’m now the spokesperson for WD-40’s new campaign which benefits U.S. Military charities. And I ’m just back from shooting a Law & Order: SVU episode in New York City. Stayed at the Trump Plaza, and they keep the place cold enough to hang meat. The set where we filmed was the same. I ended up getting a sore throat, lost my voice for a bit, but got the show done. I can’t think of many things more useless than R. Lee Ermey without a voice—unless it’s an M16 without ammo.
TK: You sure didn’t lose your voice in the GEICO commercial. It’s now one of You-Tube’s most played. But what happened to your hair?
I went to my regular barber who does a special Marine Corps flat-top just the way I like it. He was out, so they put this female barber on me. I had misgivings, but I let her take a whack at my flat-top. When I got home and looked in the mirror I was so pissed that I shaved it off. Very few barbers can do a proper military flat-top. The shaved head worked for the character anyway. Don’t you think?

TK: What was that name you called the guy on the couch?
Jackwagon. It’s a new word we created for the spot.
TK: Is it true that you have a custom chopper?
It’s totally custom and show-polished. It’s my tribute to the Marine Corps. I put the Dress-Blue paint job on it that’s dark, dark blue with red piping. And it’s got Marine Dress Blue buttons on it as well. I was wondering what I was going to do about the seat. They’re rather mundane, not much you can do about them. It was about Marine Birthday Ball time, and I had my Dress Blue uniform hanging up right here. I looked at the sleeve, and said, ‘There’s my seat, right there.’ I had an old set of Dress Blues I couldn’t wear anymore, so I ripped the sleeve off. It had the Gunnery Sergeant chevrons right there, and the hash marks and the buttons, and the piping. We used that sleeve over the seat plate. 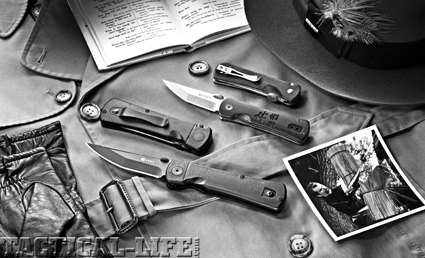 Gunny on his “Marine” chopper that was on display in San Diego, California back…