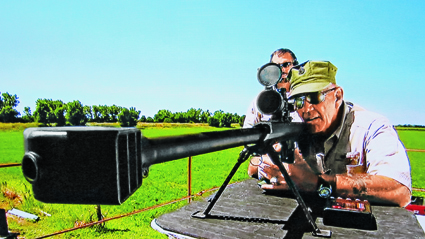 TK: There’s a photo on the internet of a young Marine corporal holding a sword in a training exercise. Is that a Marine sword he’s holding?

The Marine Corps swords are for ceremonial purposes only. We quit sword-fighting many years ago. We train with edged weapons—knives, bayonets—in judo, karate and hand-to-hand combat. I’ve got big collections of the Marine swords—officers, NCOs. I actually have an antique NCO sword made in 1860. There were very few made, and it took me about 10 years to find the one I have. Back in the day when Samuel Nicholas gathered us all together and put us on ships, we used broadswords, cutlasses—we sword-fought. That’s why we’re called “Leathernecks.” We had that leather collar around our necks so we wouldn’t get beheaded if pirates came on board. Barbary pirates were taking ships back then. That’s why the Marine Corps came into existence. A lot of people have never realized where the name “Leatherneck” came from.

TK: We had quite an April Fool’s joke the other day. A group posted an official-looking document on the internet saying that the Army was changing hats again. The announcement looked so authentic that it fooled a lot of people. The news purported that the Army was going from the black beret to the wide-brimmed Stetson, like those of the horse-cavalry of frontier days. A lot of the snake-eaters—the green beret Special Forces guys—were infuriated by what they thought was a real deal.

The Army should have gone to that hat a long time ago! That wide-brimmed cavalry Stetson is the best hat made. That’s no April Fool’s joke. The hat keeps out the sun and the rain. Even Smokey Bear wears a Stetson. I thought it was pretty strange back when some Army general decided, “These Green Beret guys are really motivated. So I’m going to have everybody wear a Beret.” And they went to the Black Beret for all soldiers, except the Airborne and Special Forces who had “earned, not issued” their maroon, tan and green berets.

TK: How do you feel about the widely accepted practice of cutting meat with the knife on the bias and against the grain?

That goes all the way back to the mountain men, when they were working on a juicy buffalo hump or game like elk. Today you might get a juicier slice of steak or roast beef that way. For game, I cut the backstrap from the animal for the nicest, most-tender piece of meat you can get on any animal. Then I try to get the rest of the meat from the bone the easiest and quickest way possible. That goes into the grinder to be made into hamburger.

TK: Switchblade users continue to get a raw deal, don’t you think?

There has been some movement in a couple of states to legalize switchblades. The fact is they never should have been banned. What about the poor guy who only has one arm? Is he supposed to open the knife with his teeth? The Anti’s are ridiculous. There is a knife organization like the NRA that is fighting to keep knives legal: Knife Rights (www.kniferights.org). It’s a sad day to say I live in a country where we have to fight to keep knives legal. What will they outlaw next? Claw hammers? 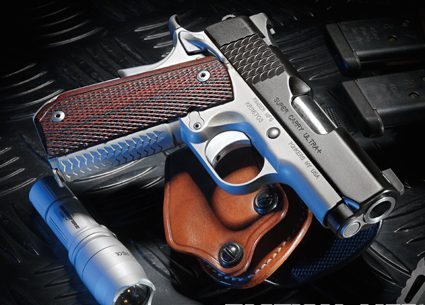 Fire in the hole! During his stint on the History Channel, Gunny found the…