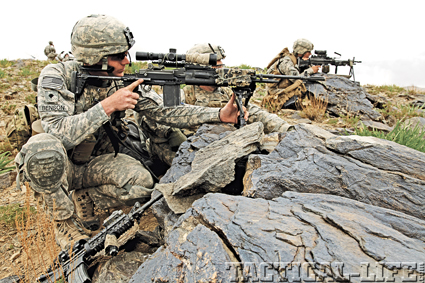 Troops are ready, how about the Obama administration? U.S. soldiers provide overwatch as a convoy passes through a valley in Southern Wardak, Afghanistan.
Comment(s)

TK: You’re just back from the National Rifle Championships at Camp Perry, Ohio. How’d it go?
I had a great time. I shot for two weeks. I shot in all the M1 Garand Matches. I shot in the M14 Match—that’s the M1A1. And I shot in the National Finals all week. This was with the 6.5 Creedmoor, my Tubb gun.

TK: Two weeks of shooting!
The National Championship itself is four solid days of shooting—with a different format every day. What a shooting challenge. Anybody can enter. That’s the thing. Everybody can shoot their hearts out, and everybody has a chance. But you’re up against world-class shooters. The four basic formats and ranges are Standing Slow-Fire, which is the off-hand. That’s 20 rounds at 200 yards. The value is 200 points. So if you miss a target once, you’ve just lost 10 points. Next comes 200-Yard Rapid-Fire. That would be either sitting or kneeling. It’s your choice. 20 rounds. Then you move back to the 300-yard line for Rapid Fire—20 rounds in the prone position. Next you’re back at the 600-yard line, shooting 20 rounds from the prone position.

TK: How’d you do in the Championship overall?
I had a magazine failure, which dampened any chances, any fantasies that I might have had toward winning anything. I had malfunctions three days in a row. Shooting Rapid-Fire. That cost me beaucoup points. I lost 4 rounds, 40 points at once. Bang! Now the National Championship was won by an Army gal, SSGT Sherri Gallagher, out of Fort Benning, Georgia. She dropped only a total of four points. A total of four in four days! In my one malfunction, I lost 40 points, so you can see how critical that is. Sherri Gallagher beat everybody on her way to setting a new record. The guy who finished second also set a new record. That’s the kind of shooting you’re up against. But it doesn’t matter. A lot of people know that they don’t have a snowball’s chance in hell to win the National Championship. But there they were—500 people shooting in this event. You would be surprised at how many people know each other out there.

TK: It sounds grueling.
I’m no kid, and I gotta tell you that at the end of the second week, I was pretty well beat up. These were grueling four-, five- and six-hour days. I’ll be there next year as well. We need to get more people involved in shooting. I just love it. We have so much fun. The guys and gals are fun-loving, good Americans taking advantage of their Second Amendment rights. And we’d better be taking advantage of our Second Amendment rights or they’re going to be taken away from us. If you don’t use it, you lose it.

TK: We were just on a fishing trip for big crappie and bluegills. We filleted a lot of fish. Do you use a fillet knife?
On a backcountry trip, just cleaning or filleting fish for supper, I would use the best knife I have along—pocketknife, belt knife. For filleting a serious mess of fish near home, or say a cabin, I like having a specialty thin-blade fillet knife. Get that blade in there and slide it along the backbone and slice yourself a lot of juicy fillets. I love crappie and bluegills, but I guess my favorites are yellow perch and catfish. And don’t forget walleye, of course.

TK: Shifting gears, the day after Obama said he thought it was OK for Muslims to build a mosque near Ground Zero of the 9/11 attack, there was so much flak, the White House had to issue what they called “a clarifying statement.”
Well, I heard him saying it, and it sounded to me like he was saying it was a good idea. No, I heard him. He didn’t misspeak! Not at all. While this has been going on, the Muslim Army officer accused of shooting all those people at Fort Hood, Texas, still hasn’t been brought to trial. I don’t know about you, but I’m a believer in swift justice, especially in cases with overwhelming and indisputable evidence against the defendant(s).

TK: As our last combat brigades were leaving Iraq, we had another suicide bomber, killing 61 people waiting in line to try to join the police forces that will be taking over. Do you think they can keep the peace?
It’s terrible stuff, what Al Qaeda and other fanatical Muslims will do to their own people. They’re so hopelessly backward and vicious. In Afghanistan, they stoned a young couple to death for violating their damn Sharia law, decreeing who will marry whom. And it was the kids’ neighbors who did the stoning—and loved doing it. I call that very sick, don’t you? They are so backward, and cruel. This is what we’re up against in the remote Muslim regions. They not only have their primitive religious beliefs to cope with, but the Taliban as well. I just don’t know if we can help them. Our military is dedicated to doing everything we can to bring it to a close. I guess only time will tell. It looks like as soon as we leave in Afghanistan and Iraq, the Taliban will move back in, assassinating elected officials, taking over again. The good Muslims don’t seem to stand a chance. I’m skeptical of what they can do when on their own.

TK: What will happen with Iran now that the Russians have stepped up their assistance in building a nuclear reactor?
I commend Israel for its restraint thus far. I mean, Iran has outwardly spoken that they want to eliminate Israel, wipe it off the map. They’re preparing a nuclear holocaust to bestow on Israel. We should have helped Israel more than we have.

TK: What are you hearing from our troops in your visits to military posts today?
It’s unfortunate, but most think Obama is a laughingstock, that he doesn’t have the slightest idea what he is doing. He is their Commander-in-Chief, and they will follow his orders, but they have no respect for the man. They respect the office, not the man. I’m hearing that from every one of them I talk to. Officers and enlisted alike.

TK: Obama did back putting more troops into Afghanistan.
He put in half the amount of troops that were requested, after a lot of hemming and hawing.

TK: What about our borders?
That’s what I’m waiting to see. I think Florida has the right idea. They jumped on the bandwagon with Arizona. Their laws are even more stringent than Arizona’s laws ever thought about being. So let’s see how that works. These states are like grapes dying on the vine. They have to do something in order to survive. California’s bankrupt. These illegals don’t pay taxes, but they sure take full advantage of all the welfare state give-away programs. They’re sucking that nipple dry. 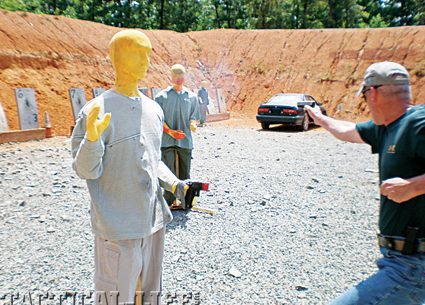