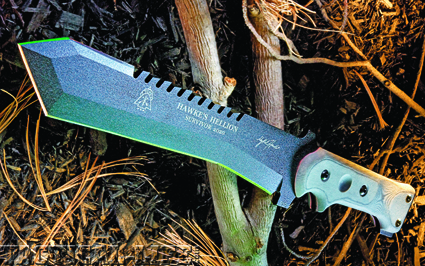 The Hellion is an enigma in that it is a fixed bladed, chopping, cutting, survival multi-tool on a relatively large scale. Having a combined total of 12 inches of plain edge cutting area, 3.5 inches of very functional saw teeth, a long stout blade, the strength of a full tang design, with a bow drill divot, built in hammer, and pommel spike, it puts a lot of ability at the user’s disposal in one easily manageable package.

Major Mykel Hawke is a 24-year veteran of the U.S. Army Special Forces. As an enlisted man he served as a Special Forces medic in communications and in intelligence operations. Two of the positions he has held as an officer were medical services officer and Special Forces commander. Mykel has spent years living and working in some of the world’s more interesting and hostile places, or “good ballparks,” as he refers to them. He spent almost two years in the rainforests of Latin America, nearly two years in the harsh desert scrub and mountains of the Middle East, a year and a half in the tropics of Haiti, a year in a hot spot in Eastern Europe, six months on the continent of Africa, and has pulled duty in the Orient. In looking over his service history, it becomes clear that the man definitely has a firm grasp on just what it takes to survive in the world’s harshest environments. Which brings us to the new TOPS Hawke Hellion survival knife!

Battle Ready
My first out-of-the-box observation was that the Kydex-lined nylon sheath was designed to be very soldier-friendly. The belt loop was wide enough to slide over a standard-issue pistol belt with no disassembly required. The back of the sheath was set up for use with the MOLLE system and had two sets of eyelets, one set at each end, for other attachment options. The pouch on the front of the sheath has an expandable opening and is plenty large enough to pack along some extra gear. The pouch cover was secured with a side-squeeze quick release buckle, and a Velcro fastening nylon cinch strap. The knife itself is secured in the sheath via dual Velcro fastening retention straps.

The next thing I noticed before drawing the knife from the sheath was that it has a very positive grip. The depth of the first finger groove functions much like a sub-hilt, but without being so long as to get in the way. Upon drawing the blade, I finally got to see in person the unique blade shape that I had been waiting on ever since it first appeared on the TOPS website some weeks back. Just looking at this blade, it is immediately obvious that normal aesthetics were cast aside, or more likely never even considered, as the knife was designed from tip to pommel from a purely “functional-in-the-field” perspective. Cheers to Mike at Tops Knives. 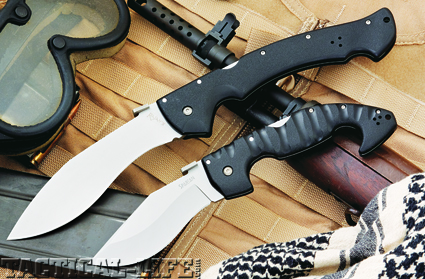 From the Greek Peninsula and the Mountains of Nepal, Cold Steel brings forth two...