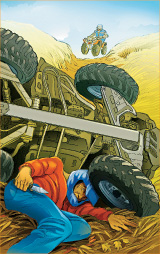 First a little background. My brother Mike and I live next door to each other outside of Raleigh, North Carolina. Mike was here first. When I retired from the Air Force in 1995, I planned to be an over-the-road trucker and, by living next door, he could keep an eye on my place.

My nephew Clint, who lives in Virginia, came down for the Thanksgiving 2008 weekend to visit Mike and Mike’s wife. On Friday I asked Clint if he had a knife and he replied that he did not. So I gave him an assisted-opener SOG folding knife I had recently bought over the web. We tested it on a piece of newspaper and it easily sliced the paper. The reason I was willing to give him that knife is that I didn’t particularly like the safety, which I personally found difficult to manipulate.

Let’s Ride!
On Saturday Clint, Mike and a few others went over to an ATV riding park near Goldsboro, North Carolina. It was Clint’s first time to ride an ATV. At one point, one of the other riders got his ATV stuck in a mudhole. While the others were otherwise occupied getting the stuck ATV out, Clint decided to do a little riding by himself. Coming over the top of a small hill, Clint was surprised to find a large hole on the other side. As he dropped into the hole, the ATV and Clint exchanged places and the ATV ended up on top of him.

Fortunately, the ATV’s weight was concentrated almost entirely on his helmet. Unfortunately, the way he was pinned, he couldn’t push it off himself or unfasten the helmet strap. However, he did have the SOG I had given him earlier. Thankfully he was able to wiggle it out of his pocket. This is where the safety came into the act. Clint got the knife out, but as a result of not being familiar with it, he was unable to push the safety off. Lady Luck once again smiled on him because he was able to get the knife into a position where he could see the safety under the corner of his helmet and was able to release it.

He slipped the knife under the helmet strap and with one pull severed it. Once the strap was cut, he managed to free himself. A couple of riders from a different group came up at this point, having spotted the toppled ATV. With their help Clint was able to get it back on its wheels. To his surprise, it started up immediately and he returned to the group he was riding with that day. The only damage he suffered was blistered fingertips from one hand coming in contact with the exhaust pipe during his struggle.

Here are a few lessons he learned from his experience:
•    Don’t ride by yourself.
•    Be extra careful when riding in unfamiliar locations.
•    It’s a wise precaution to carry a knife in an accessible location.
•    Keep your knife sharp.
•    Be familiar with your equipment. If Clint hadn’t been able to get the knife where he could see the safety to disengage it, he might have been pinned there much longer.
•    Don’t panic, keep your wits about you. (I would say Clint did a good job with this one.) 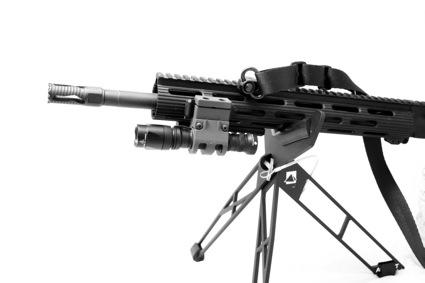 First a little background. My brother Mike and I live next door to each…