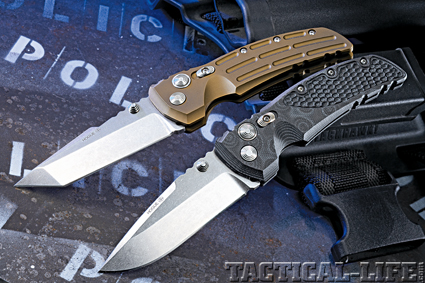 The Hogue/Allen Elishewitz collaboration has resulted in the EX01, a series of precision machined, superior strength, innovative knives for a discerning tactical user.
Comment(s)

Allen Elishewitz has been a young man in a hurry. I first ran into him at a show in the mid-nineties—it couldn’t have been much after he got out of the Marine Corps in 1995. By then he’d already been recognized: “Best Utility Knife” award at the 1992 Lone Star Knife Show in Dallas, youngest maker accepted into the American Knifemakers Guild in 1994 (he’s currently on the Guild’s Board of Directors), and the Beretta award at the 1995 Guild Show.

He was in the first wave of tactical knife makers, a focus that he maintains today. He’d been making knives since 1988 and for several years before meeting him I’d been hearing his name as one of the real comers in the business. I’d even heard men much older credit him with teaching them a great deal. He certainly had the background for it: decades of martial arts experience in several arts, and a team leader as a Recon Marine. In addition, he has a fine arts degree, having been trained in various art forms from a young age, including acid etching, printing, drawing, painting, architectural drafting, guilloche work and enameling. In 1985 he won the first place at the Asian Art Fair in Singapore and he was the first knife maker to introduce the lost art of guilloche to the cutlery world.

All that makes Allen a pretty rare breed in knifemaking circles: a Recon Marine who’s won art competitions; a martial artist who’s also a fine artist. That combination of skills and the drive to go with them has propelled Allen to the top tier of his profession, and his knives continue to impress.

New Hogue Connection
His latest foray is a collaboration with Hogue Inc., which is best known for their pioneering line of handgun grips, rifle stocks and firearms accessories. Hogue/Elishewitz Extreme Knives is the result. Allen brings his technical, artistic and design expertise, while Hogue contributes their experience in the manufacturing process and in making ergonomic handheld products. Hogue, a company well known for their machining expertise, makes all the major parts and assembles each knife.

The EX01 is the first in the Hogue/Elishewitz Extreme Series, based on Allen’s custom Spatha. The press release calls it “extremely durable, yet simple, elegant and practical.” I couldn’t describe it more accurately; it’s all that and more. The knife is available with a drop point or a tanto blade (both 0.150-inch thick) in both 3.5- and 4-inch lengths, and two handle materials in an array of colors. The blade steel is 154CM double tempered and cryogenically treated to 58-60Rc and stone wash-tumbled to a lovely patina. The lock is an oversize, heat-treated button lock, improved by Allen. He got rid of the flange around the button and bumped it up to 5/16-inch diameter. He also put a taper on the button and the blade (rather than just the button), resulting in a stronger and better lockup. Available handle materials are G-Mascus (a proprietary Hogue material that is like a Damascus version of G-10) in black or green, and 6061 T-6 aluminum (type 3 hard anodize) in black or olive drab.

The G-Mascus has a dimpled texture on the rear of the handle, while the aluminum features grooves for grip enhancement. The weights of the models average about 4.5-ounces. Other features of this stout but standard-size knife are the massive 1/4-inch hardened pivot pin, oversize button spring, ambidextrous “pyramid”-style opening stud, and the tip-up/tip-down spoon pocket clip. The bolster plates (beefy, inset partial liners on the G-Mascus models) and button bushings are original ideas from Hogue, influenced by the 1911 pattern pistol. Finally, there are no washers per se, but rather slightly raised portions of the aluminum frame or bolster plate that make contact with the pivoting blade. This is a construction method that you seldom see (it requires precision machining) but is superior in that it provides increased lateral strength to the opened knife. 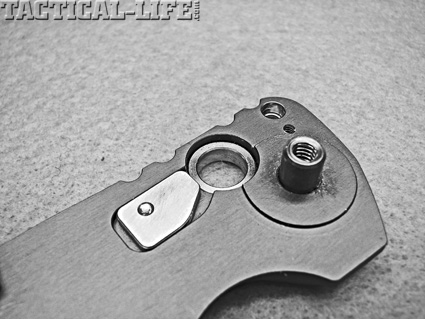 On this close-up you see the slider safety and the raised frame portion that contacts the blade instead of washers. This construction method makes for a very strong folding knife.

Sliding Safety
The sliding safety is reminiscent of old Italian stilettos, but enhanced. The EX01 safety has two modes: If the safety is pulled all the way in the back (disengaged), you can open and close your knife like a regular button lock; when the blade is open you can slide the safety forward to the on position and it traps the button so the knife can’t close. When you close the knife, you can push the safety to the half-cock position and when you open the blade, the inertia and shock of the blade hitting the stop pin cause the safety to engage automatically. Finally, the EXO1 incorporates an Elishewitz original: the lanyard pin, which he came up with about 20 years ago.

I asked Allen for what purpose the EX01 was designed. Paraphrasing his reply: The knives I design will always be military/tactical and self-defense/fighting knives. I believe a military or fighting knife does not have to be crude, bulky, unsophisticated, or dark in appearance. In fact, a knife that is sophisticated in appearance allows it to go unnoticed and not look threatening. The deep finger grooves and the handle are shaped to lock your grip in all different positions. The length and width of the grip prevent your hand from fatiguing in long periods of use. The way the handle tapers and the chamfering and texture allow complete control of the handle and blade at all times. The safety on top of a massive hardened button lock insures that the blade will not fail during hard use. I designed the drop point with an ever so slight recurved edge as a utility all-purpose knife with the tip located near the center line; it also doubles as a great fighter. The tanto version with a much steeper angle on the chisel allows easier penetration than the conventional tanto with the false edge pushing the tip closer to the center line. I thinned out the heavy front end of the tanto with the false edge making a diamond pattern on the spine.

That answer is a great example of why I always try to ask a knife designer about their knives—they can almost always tell me (and therefore you, the reader) about details of the knife that we’d have missed. And I can speak from experience about Allen knowing his handle ergonomics; years ago he handled a knife I’d designed for about…maybe two seconds…before he identified an ergonomic flaw in the handle that I’d missed. 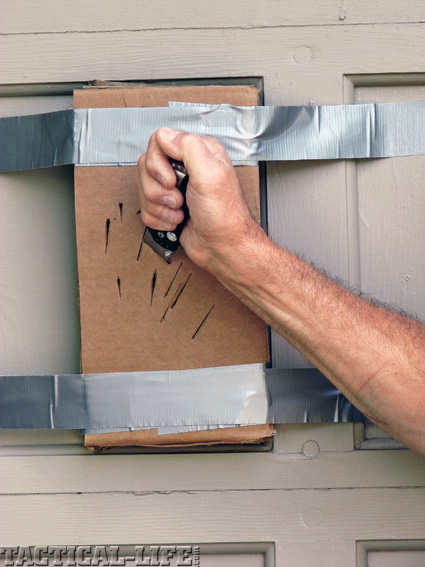 A half-power reverse thrust into tightly bound cardboard buried the 3.5-inch blade up to the opening stud. That’s more than sufficient penetrating capability for a tactical knife.

Cutting Tests
I remember that not too many years ago a production knife that would slice thin slices of copy paper was really sharp. I also remember when a 4-inch blade that cut 3/4-inch manila rope in three passes was good. But the quality of production knives has now gotten so good that I now expect teensy-thin slices of paper and less than three passes with only a 3.5-inch blade thru fiber rope. Reverse-grip half-power thrusts buried the EX01 to the stud in tightly bound cardboard. Frankly, I was a little suspicious about the 154CM since this steel disappointed us frequently a decade or so ago. But apparently the heat treat—or something—is now right because these knives worked! Since great cutting performance is now standard on quality production knives, I just assume it…and evaluate the knife relative to how well it works with the user to perform its intended job.

It’s important to evaluate things in light of the purpose for which they were designed. Allen calls the EX01 a military/tactical and self-defense/fighting knife. I can’t tell you what makes a first-class military folder, but Editor Steven Dick has said that it’s basically a good utility folder with a little extra margin of strength for those really bad days. Well, the EX01 is strong. Clamping about half the blade in a vice, holding onto the handle, and leaning back at a 45-degree angle not only didn’t bend anything, but neither did it introduce any play into the blade’s lockup. Also, pushing down with all my weight onto the back of the handle didn’t cause the lock to fail. As far as a self-defense/fighter goes, I look for three things in that sort of knife: 1) Ease of access and opening. The EX01 comes out of the pocket easily with a forefinger/thumb pinch hold, and the forefinger catches nicely on the bottom of the radiused spoon clip. It opens like silk with a medium flip of the stud. 2) Good cutting/thrusting performance. See above. 3) Lively movement and proprioceptive feedback (that is, you know where the knife is in space by feel). The EX01 balances on the forefinger, and its 4.2- or 4.4-ounce mass is distributed so well that as the knife moves through space, you always know exactly where the blade is relative to your hand. This is a subtle thing, but something that’s important on a good fighting knife.

The Hogue/Elishewitz knives should be available through all of the usual channels: retail, distribution, web, etc., as well as on the Hogue website. According to Allen, he and Hogue have “lots of stuff planned—more folders, fixed blades, autos, tons of different stuff.” That gives us all something to look forward to! 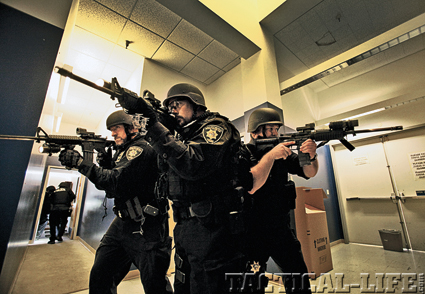 Allen Elishewitz has been a young man in a hurry. I first ran into…