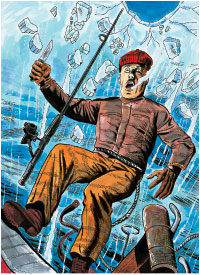 Ice fishing has always been a passion of mine. After working a 40-hour week as a supervisor in a manufacturing facility, it’s always refreshing to spend a weekend alone, fishing on a frozen lake. Although my wife had warned me many times that this sport could be dangerous, the risks always seemed worth it at the end of the day.

That cold February Saturday started out just like my past weekends. I loaded all my gear into my Jeep and headed out to my favorite spot, totally devoid of other humans. The winter had been particularly cold and the lake had turned into a frozen paradise. Sticking to my normal routine, I loaded my cooler, chair, ice auger and fishing gear on to the small plastic sled, tied a rope from the sled to my waist and began the trip out on the ice pack.

As I traveled I stopped every so often to drill a hole and fish for a while. Having no luck, I traveled farther out on the lake until I finally started catching fish. “What a day,” I thought to myself as I hauled in perch and crappie from beneath the ice.

Around 4:30 in the evening I decided to call it quits since I already had 11 fish on ice in the cooler. Reversing my routine, I loaded all the gear back on to the sled, tied the rope around my waist and started to pull everything back to shore. I was walking back on the same route I had traveled on earlier.

As I got near the second to last hole I had drilled earlier in the day, the ice cracked and gave way without warning.

I was instantly under water with the sled and the weight of my gear rapidly pulling me deeper and deeper beneath the ice. At this stage I was in full panic. The cold water hurt and my heavy coveralls made it hard for me to move. I knew I only had a few seconds to free myself from the rope or I would die. Reaching into my coverall pocket, I pulled out my Ontario TAK knife that I always carried on my outings, managed to unsheath it, and then cut the rope from my waist.

Fighting for my life, I made it back to the surface and tried to get back on the ice by using my elbows, but the ice kept breaking. With the TAK still in my hand, I stabbed as far as I could reach and stuck the knife in the ice.

Carefully, I managed to pull myself out using one elbow and the grip I had on the TAK. Still in a panic and almost too cold to move, I made it back to my Jeep, stripped off all my clothes, and threw on a blanket that I had in my vehicle. After the Jeep heater thawed me out enough to function, I was able to get back home and listen to my wife say, “I told you it was dangerous.”

Two days later I went back to the lake (staying on shore this time) to look for the knife, since I must have dropped it somewhere from being so cold and in a state of panic. Although it was nowhere to be found, and although I’m out a nice cooler, some fish, a sled and ice fishing gear, at least I have my life. If I would have been carrying a folder deep in my pocket instead of an easy access fixed blade, I probably wouldn’t have been able to retrieve it deep inside my coveralls.

I owe my life to an Ontario TAK knife and that’s what I’ll carry with me from now on when I venture into the wilds.