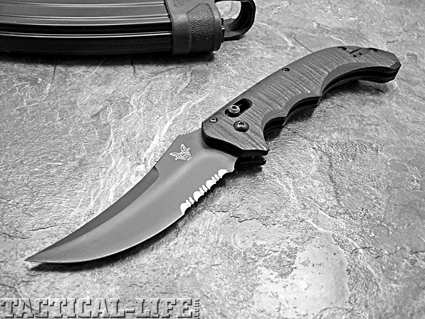 The Bedlam’s sweeping curves and large, contoured handle are unique in the automatic knife arena.  These features combined with Benchmade’s high build quality set this knife apart from the production pack.

The Benchmade 8600 Bedlam is a very interesting knife. It was allegedly designed for a Middle Eastern Prince’s protective detail by Benchmade’s in-house design staff. The jambiya-inspired saber ground, upswept blade certainly looks the part, but does the look equate to real tactical performance?

At an overall length of 9.75 inches, the Bedlam is a hefty knife. The sharply curved blade and handle accentuate this and for a 4-inch blade, the knife is large, but comfortable to hold in a multitude of grips. The handle of the Bedlam really gets interesting as Benchmade has devised a very unique machine-cut texturing for the G-10 scales that is quite organic in appearance, which along with the subtle finger grooves and pronounced guard, gives an extremely secure working grip in adverse situations. I tested this by thrusting the Bedlam’s blade into phonebooks with oily and wet hands and suffered no slippage whatsoever. I repeated the task in reverse using the steel striking pommel with the same results. Very secure. No slips. No cuts.

AXIS Powered
By now, the Auto-Axis mechanism is well known to auto-knife aficionados. It is incredibly strong, fast into action, and completely ambidextrous. It is somewhat unique among the new breed of automatic knives in regards to the latter characteristic. I would also be surprised if the AXIS lock could be easily broken in normal usage, especially in the case of the Bedlam where there are five separate handle fasteners holding it all together for enhanced rigidity. As with Benchmade’s other AXIS autos, the Bedlam has a simple, ambidextrous sliding safety on the rear of the handle that rigidly blocks the AXIS release. This safety is a passive safety and requires an extra step to engage or disengage.
Back to the AXIS lock. This mechanism is the industry standard for alternative knife locking mechanisms—easy to use, brute strong and ambidextrous. Lots of companies have come up with locks, but the McHenry-Williams designed, Benchmade-engineered AXIS is hard to beat. I have used a 710 AXIS manual prototype since they came out over a decade ago without the hint of excessive wear or failure—they are that good and consistent. Most people don’t know it but the AXIS was originally conceived by Bill McHenry and Jason Williams as an auto release for their embellished high-end autos, but instead became popularized in manual knives when Benchmade licensed the design. 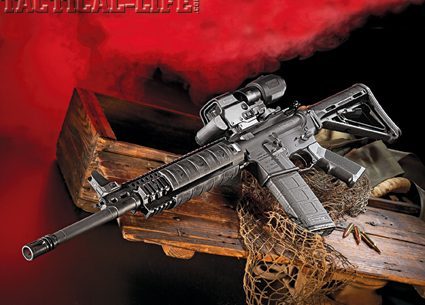 The Bedlam’s sweeping curves and large, contoured handle are unique in the automatic knife…