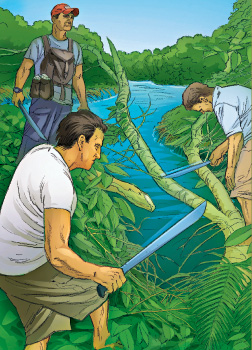 EDITOR’S NOTE: SEND US YOUR STORY!
Tactical Knives pays its standard column rate for the “It Happened To Me” stories it publishes. If you have one you would like to share with our readers, please email it to [email protected]

The Costa Rican river we were rafting with a local guide was not known for being particularly challenging—just a wet, fun run of no special appeal to extreme sports types. On the other hand, it still had a fairly strong current at the end of the rainy season and there were a few rapids you could probably call class II to III-ish—just enough to keep it exciting and not too much work paddling.

There had been loads of wildlife along the banks: iguanas, basilisk lizards, a few small crocodiles, monkeys, and various wild parrots and scarlet macaws. Everyone was hoping for a rare glimpse of a jaguar but we hadn’t been that lucky so far. Sliding down yet another mild rapid we came to a vast logjam, at least 100 yards long, blocking the entire river channel. From what I later gathered, this was a common hazard at the end of the high-water period. You never knew what you would find until you floated the river for the first time each year. One thing was for sure; we weren’t going back the way we came. Face it, with a raft you don’t really paddle back upstream in anything but dead calm water. The plan for the trip had always been pretty much one-way.

Given this was a classic rain forest, the banks of the river were dense jungle vegetation. It was clear we weren’t going to drag/carry our raft and gear around the driftwood pile through that green hell! Smiling like he knew a secret joke, the guide pulled out a large canvas duffle bag from his end of the raft and proceeded to hand each of the males in the raft a long El Salvadorian-made Imacasa machete. I was guessing he had done this before.

Then the real work started. Rotating the point machete man, we began chopping a raft-wide portage path around the logjam. When one of us stepped back to let the next machete wielder go to work, the guide would take our blade and give it a quick touch-up with a large file he had also produced from the same bag. Three hours later we had a trail cleared around the jam and all our gear moved downstream. The rest of the trip was relatively uneventful but it was a couple of weeks before the blisters on my hands healed. I’m sure the guide thought all us Gringos needed to toughen up a little.

I’m not sure what we would have done if the guide hadn’t foreseen this situation. But then, the locals never travel anywhere in the jungle with out their faithful machetes. I also hope the next party down that river appreciated the work we did to clear their portage! From what I was told it would only take a few months of neglect before it was grown over again. Of course, the next rainy season would probably shift the logjam to a new location. In any case, I came away with a very special appreciation of the value of a good machete in the jungle. 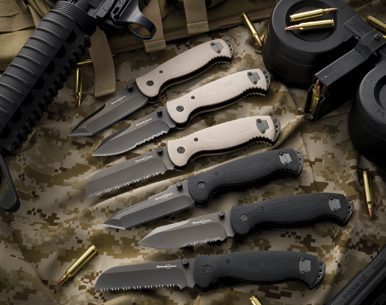 Read about the latest tactical, hunting, and survival knives and tools from top manufacturers.