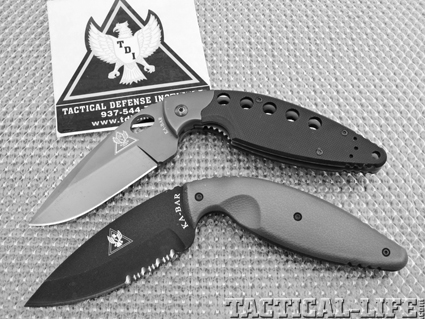 The TDI knife was born from the training school of the same name. TDI is a full-service institution that offers training in hand-to-hand, impact weapons, edged weapon and every level of firearm. The folding TDI knife is the same as the large TDI fixed blade in size and shape.

John Benner, president and founder of the Tactical Defense Institute (TDI), has been my friend for over 20 years. I first met him in a class taught by John Shaw, founder of the Mid-South Institute for Self Defense Shooting, where we both realized we were not as good at shooting as we had previously thought. Benner was just getting his training company up and running, and I found him to be both knowledgeable and fun to be around. Our paths crossed repeatedly through the years as we took several training courses together (he beat me into the ground at a Defensive Tactics Instructor course where I found he was not susceptible to pressure points and I very much was) as well as both of us being in command of drug task forces funded by the same federal grant.

Our methodology for teaching the combative application of the handgun is so similar that it is almost scary, even though we developed our doctrine separate from one another. I contracted John to train the members of the task force I commanded and I have had the good fortune to be a student in a number of TDI courses. I only say this to let the reader know that I have great respect for John, but I once thought he was out of his gourd. 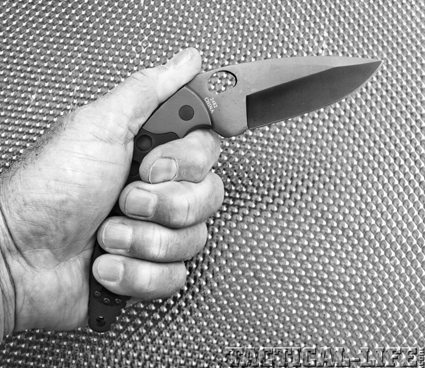 The saber grip allows the TDI folder to be used as either a stabbing, chopping or slashing weapon. The grip surface is quite secure.

Convincing KA-BAR
A number of years ago, he showed me a prototype knife he designed as a weapon retention tool for uniformed cops. It was a goofy-looking curved knife with a pistol style grip. John felt it would be easy to draw and use as a last ditch close-quarter weapon for a a police officer who might be fighting for possession of his gun. He tried to sell the idea to a manufacturer (no longer in business), but did not get very far. Admittedly, I was not surprised—I thought the idea was dumb but did not have the heart to tell him. Boy, was I wrong! This was not the first time in my life that I lacked the foresight to see a good idea when it was presented to me. Not only did John convince the legendary KA-BAR Knife Company to manufacture his design, there is now an entire line of TDI products manufactured by KA-BAR, designed by John and his TDI instructors. 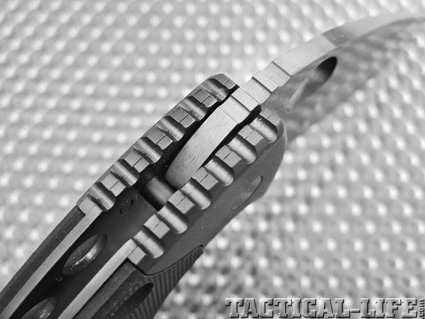 The jimping on the top of the blade and grip solidly locks the gripping thumb in place. 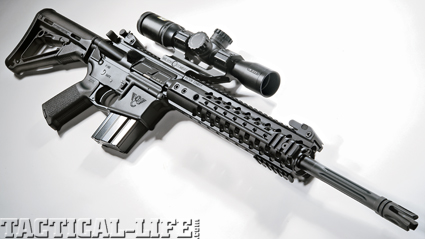 The TDI knife was born from the training school of the same name. TDI…