During the Eighties I utilized a metal detector to search for Civil War artifacts every opportunity that presented itself. My wife had obtained permission for me to search on a coworker’s relative’s property—supposedly, they had never before granted anyone trespass permission. The area abutted the fenced private pasture thru which Camp Creek flowed and had been the site of serious combat on May 14, 1864. As usual, others had been there before me, sans permission, and the ground exhibited a plethora of unfilled holes. Regardless, the day was productive with my finds consisting of fired minie balls, artillery shell fragments and fuses, a Confederate block I button and canteen remains. The most poignant find was on the side of a small hollow through which a rivulet ran where a soldier apparently rested, and lost the contents of his pocket—a dozen unfired minie balls, a pocketknife, a small brass squirrel, and a gold wedding band.

As I hunted near the Camp Creek pasture fence, I came upon an opening. On the ground I spotted a distinct blood trail and canine tracks. I followed the trail into the woods and discovered a half-dozen stray dogs—one or two of which were sporting collars and rabies tags—standing over the carcass of a young cow. The dogs demonstrated their displeasure at my presence and adopted a threatening attitude. I sheathed the brick hammer I’d been using for digging and began to retrace my steps. At the same time I began to draw my recently purchased revolver loaded with .44 Special hollow-point ammo (a previous encounter with the Deliverance twins had convinced me of the efficaciousness of being adequately armed while woods-walking).

The dogs continued their menacing advance and I felt justified in deploying my revolver. I fired three times and dropped three of the four advancing on me. I again pulled the trigger—with no result! A closer glance at my revolver and I was horrified to find the hammer limply positioned past full-cock; the hammer spring had broken! While continuing my withdrawal, I held my detector in front of me, re-holstered my out-of-commission revolver, and drew from my right rear hip the USMC KA-BAR the guys in my unit had given me as a gift upon my discharge. I had modified this knife a la the late Chuck Karwan’s famous “Kar-Bar” and was grateful to possess it and felt confident should its usage become necessary. – Joseph Dombrowski 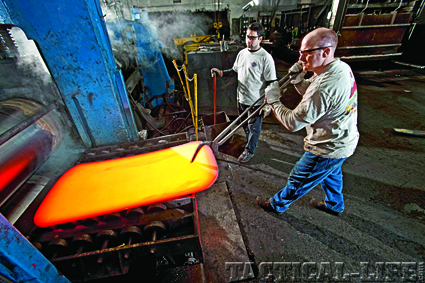 Out Of The Rumor Fire