When I was 13 years old, I read the classic book Kill or Get Killed for the first time and was captivated by its practical, functional approach to all aspects of close combat. The author of that book, Col. Rex Applegate, had been the close-combat instructor to the Office of Strategic Services (OSS—the predecessor of the CIA) and Military Intelligence Training Center (MITC) during World War II and was one of the acknowledged legends of military close-combat training. About 20 years later, I was hired by Paladin Press to not only establish and run their in-house video department, but to work directly with Col. Applegate on several video projects. 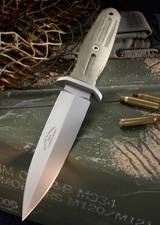 The Colonel, who actually gave the final approval on my hiring, appreciated my avid interest in weapons and close-combat skills and we quickly became friends. During the years we worked together, he not only shared a great deal of information with me but he also took the time to personally educate me in the finer points of his approach to close combat. Ultimately, he recognized my understanding of his methods by inviting me to co-author a book with him on his method of handgun point shooting. That project, ultimately titled Bullseyes Don’t Shoot Back, remains one of my proudest accomplishments and greatest honors.

Birth of the Applegate-Fairbairn
What does all this have to do with knives? Well, during the many conversations I was privileged to have with the Colonel, we often discussed fighting knife design and, in particular, the details of the dagger he designed with the equally legendary W.E. Fairbairn at the end of World War II. That design, known as the Applegate-Fairbairn, was intended to address the many shortcomings of the iconic Fairbairn-Sykes commando dagger that was the mainstay of many soldiers during that war. The F-S, as it was commonly known, suffered from many design and production flaws, including inherent structural weaknesses at the tip and shoulders of the blade, a round, solid metal handle that made the knife difficult to orient in the hand and a profile and edge geometry that made it very ineffective as a cutting weapon.

Acknowledging those shortcomings of the Brit commando knife, Applegate and Fairbairn collaborated on an improved dagger design that would provide everything a soldier needed in a true fighting blade. However, the war ended before the design could be brought into production.

Decades later, the Colonel resurrected the design, first as a custom piece made by knife maker T.J. Yancey and later in various commercial versions. Although he was very pleased to have the knife in production, the Colonel, always a perfectionist, never felt that any of the commercial versions produced in his lifetime were exactly “right.” Well, somewhere up there in heaven, he’s smiling ear to ear, because the latest version of his iconic dagger is about as perfect as it can be.

The Legacy of a Legend
Boker’s new A-F 5.5 is a unique blend of the original spirit of the Applegate-Fairbairn with the design insights of renowned custom knife maker Bill Harsey. For the record, Harsey was an integral component of Col. Applegate’s efforts to bring the original A-F design into commercial production. During the 1990’s, the Colonel personally chose Harsey to prototype his knife designs. Along with automatic knife wizard Butch Vallotton (who shared a critical role in all the Colonel’s folding knife designs), Harsey was instrumental in translating Applegate’s concepts for fighting knives into steel. His custom versions of the Colonel’s designs are highly prized collector’s items and his understanding of Col. Applegate’s perspectives on fighting knife design is second to none. The Boker A-F 5.5 clearly reflects this depth of understanding, as well as Bill’s intimate knowledge of what a modern warrior needs in a knife.

The blade of the A-F 5.5 is, as the name implies, 5.5 inches long. This is ½-inch shorter than the blade of the classic A-F pattern and makes the overall length of the knife 3/8-inch shorter. Although this may seem a subtle difference, to today’s soldier, it can mean a lot. Modern soldiers carry a tremendous amount of equipment and often deploy by vehicle. This has shifted their combat load from belt-mounted and pack-mounted gear to carry on MOLLE vests and drop-leg platforms. Since a knife is secondary to more critical items like magazine and grenade pouches, it must compete for real estate on these carry platforms. Smaller knives and MOLLE-compatible sheaths that fit better into the configuration of a modern soldier’s combat load are a very smart thing.

Ground from 440C stainless steel, the blade of the A-F 5.5 is slightly (about 1/8-inch) broader than the blade of the classic A-F and features two subtle choils at the ricasso. This change not only results in improved edge geometry, it also ensures that a functional cutting edge can be maintained all the way to the shoulders of the grind, guaranteeing superior cutting performance along the entire length of both edges.

The classic forward-angled guard of the original Applegate-Fairbairn is also present on the A-F 5.5, but instead of traditional brass, it is made of stainless steel. Like the blade, it is bead blasted to yield a dull, non-reflective gray finish that is ideal for military environments where light discipline is a must.

One of the most unique features of the A-F 5.5 that instantly sets it apart from the classic version is the extended glass-breaker tang. While all previous versions of the A-F had a wide, concealed tang that extended about three-quarters of the way through the signature two-piece handle assembly, the tang of the A-F 5.5 extends all the way through the end of the handle. There it terminates in a stout, chisel-shaped point designed to function as an emergency glass breaker. This feature also makes a very potent impact weapon for close-quarters strikes with the butt of the knife, without making the knife difficult to carry—a problem with many of the overzealous “skull crusher” designs out there.

Nearly a Harsey Custom
My favorite aspect of the A-F 5.5 is its handle. Most commercial versions of the Applegate-Fairbairn have had two-piece handles molded from fiberglass-reinforced nylon or Delrin. Although these materials offer a very good grip, they don’t hold a candle to Bill Harsey’s custom knives, which feature bead-blasted Micarta or G-10 grips. Several years ago, I had the opportunity to purchase an entire series of Bill Harsey custom knives that are closely associated with Col. Applegate’s legacy. Every time the Colonel would commission a new prototype design from Harsey, Bill would mark the guard “001.” The original owner of my knives, my former boss at Paladin Press, had a standing order to receive duplicates of every knife Harsey made for the Colonel—all marked “002.” These rare custom knives provide exceptional insight into the true spirit of what Col. Applegate and Harsey really intended the A-F family of knives to be. They also provide the ultimate “scale” for judging the quality of the A-F 5.5. In a word, the A-F 5.5 is outstanding.

The handle halves of the A-F 5.5 are precision machined from green canvas Micarta, a classic knife handle material and still one of my favorites. In addition to well-placed milled grooves in the handle (a signature feature of the A-F rendered with a slight variation on the 5.5), the overall texture of the handle is left slightly rough. This finish, combined with the layered canvas construction of the Micarta, provides an incredibly positive grip, even when the handle is wet or your hands are cold. As expected, the handle halves mate flawlessly and are secured by a single stainless steel hex-head screw assembly. Unlike other versions of the A-F, the 5.5 also features a stainless steel liner in the thong hole.

Spec-Ops Carry Perfection
As mentioned previously, the A-F 5.5 is designed to meet the needs of today’s warrior—including being optimized for carry with modern equipment loads. To achieve this, Boker teamed with one of the best sheath makers in the business, Spec-Ops Brand (USA). The sheath for the A-F 5.5 is a version of Spec-Ops’ Combat Master knife sheath. This innovative sheath features a unique, Velcro-secured split-loop hanger that allows loops to be threaded directly to any MOLLE platform and does double duty as loops that fit any belt up to 2.25 inches wide. Rather than a traditional 550-cord leg tie-down, the Spec-Ops sheath features a “Diamond Braid Cord” woven through a series of grommets around the periphery of the sheath. This cord arrangement works with the MOLLE-compatible hanger straps to allow the sheath to be securely attached to a vest, armor carrier or other platform.

The foliage green sheath also features a nylon/elastic snap-fastened retaining strap that holds the handle of the knife very securely, as well as a pair of grommets in the hanger loops that allow the knife to be further secured into the sheath during airborne operations. A Kydex liner protects the nylon body of the sheath—not to mention the soldier—from the edges and point of the blade and is secured to the sheath body with a screw. The sheath also includes an external Velcro-closed pocket that provides a handy home for a multi-tool, spare pistol magazine, or other kit.

One of the things that always amazed me about Col. Applegate was that he never stopped thinking and was always looking for ways to make gear and tactics more effective for the troops in the field. I am confident that he would consider Bill Harsey’s modifications to the classic A-F design worthwhile improvements and would give the Boker A-F 5.5 his personal stamp of approval. I certainly do.