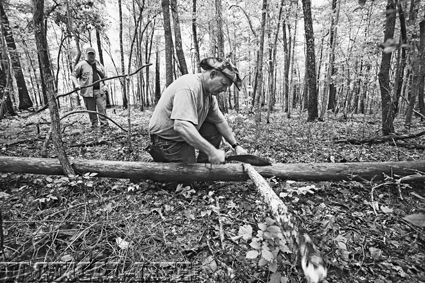 This survival student uses a Kukri-style blade to chop a sapling in two. Shortly after this photo was taken he was introduced to a machete and used it for the rest of his survival tasks throughout the training course.

While reading through recent issues of Tactical Knives magazine, a couple of stories grabbed my attention: In the May 2010 issue Brian Griffith penned his thoughts on why a big knife beats an axe in a wilderness survival setting (Blade Vs. Axe, page 64), with Steven Dick offering his counterpoints in the July 2010 issue (I’m An Axe Man, page 44). Even though I’m a fan of a lot of different blade styles, I feel there was a critical player not involved in this sharp edge survival challenge—a machete.

Make no mistake about it, a machete is not the same as a big knife. In fact, there is as much difference between these tools as there is between a camp knife and an axe. So in the interest of fairness, the machete deserves its due among the big tool, wilderness survival debate. For the most part, machetes are looked upon as cheap tools made for equatorial jungles without even being considered a contender in the wilds of North America. Well, if you believe that then you haven’t spent enough time away from the trailhead. Just ask any surveyor what his favorite tool is while shooting azimuths through rough terrain and I guarantee you his answer won’t be an axe or a large bowie knife. 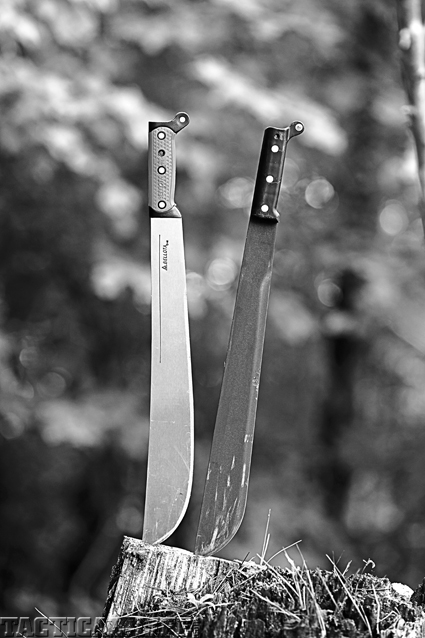 Eighteen-inch machetes such as the inexpensive Bellota and Ontario are the author’s favorite wilderness survival blades, whether it’s in a Third World jungle or the backwoods of Alabama.

As for survival skills, a machete will do as well, if not better, in most cases than the more obtuse geometry found on both the axe and large knife. Granted, machetes may not be the best tool for every job, but overall they are at the top of the list for performance in many different latitudes of survival. So, my focus is not to convince the reader that a machete is the most capable at performing the various tasks of wilderness survival, but I do ask them to read this article and then personally put a good machete to the test, one-on-one, against their favorite large blade or axe.

Shines For Shelter
The first thing I noticed about both previously mentioned articles is the photos showed plenty of debris on the ground, yet both authors talk about building shelter with their blade. Now, I realize that the intended goal was to test the tool, instead of being in an all-out survival scenario. With that said, I think it needs mentioning that any victim would be better served building a debris shelter from what’s available on the ground instead of expending energy building a lean-to that provides little, if any, insulation from the elements. But for the sake of argument, let’s say we have to build a lean-to and cover it with brush. All of this work can be accomplished by harvesting understory growth (small saplings) for your structure support and filling in the top with small branches and and/or debris found on the ground. There is nothing more efficient at doing this chore than a machete. One clean angular swipe on just about any 2-inch sapling will sever it without much work. So unless my structure is going to be a log cabin, the thin blade wins this task. 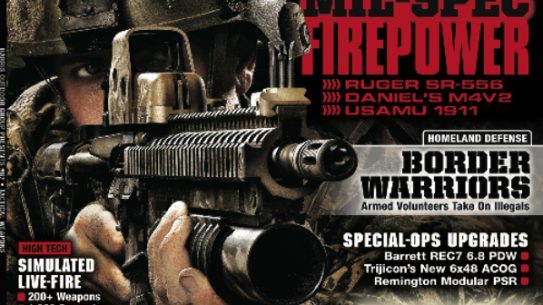 This survival student uses a Kukri-style blade to chop a sapling in two. Shortly…