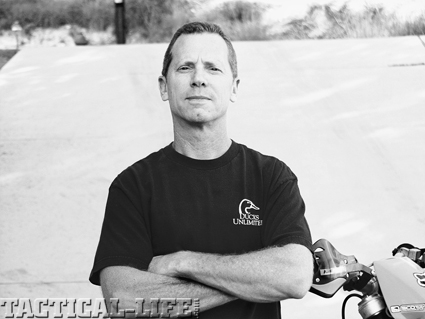 You might say he has steel in his blood. There are two sides to Texas knifemaker Pete Carey: one that can build a steel structure the size of an airplane hangar out of several tons of steel, and another that can build a slick tactical folder with the precision of a Swiss watch. Of course we’ll focus on the latter, but Carey’s keen ability to understand how steel “works” has had a huge impact on his career.

Pete got hooked on knives at an early age and once the custom knifemaking bug bit, he never looked back. According to the knifemaker, “My first knife was a folding Boy Scout knife. I got to use a knife quite a bit in scouts and fishing with my dad and brother. My brother Richard had a lot to do with my interest in knives; when he came back from Vietnam, he always carried a Puma folder, the one shaped like the Buck 110, and I wanted to be just like him.”

The 50-year-old Texan’s knives bear no resemblance whatsoever to the large, boxy buildings he built early on in his career, but Pete says his previous experience in the heavy steel industry was very helpful in making knives and he draws an interesting analogy as such. “For about 27 years I was involved in the fabrication and erection of structural steel in the Los Angeles area in Southern California, the last 20 of those as a licensed contractor. Building a knife is similar to fabricating steel for a building; first you fabricate the parts from raw material, then you fit the parts together. Using all the large tools to fabricate steel made it pretty easy to use the small tools to build a knife. I think my experience as an inspector also helped me with my attention to detail.” Just to give you an idea of Carey’s early experience with steel, he worked in fabrication shops as a helper, welder, fitter, layout man, foreman and inspector, and in the field as a connector, rig welder, foreman and inspector for a total of 27 years!

Carey’s interest in knifemaking peaked in the mid-1990s when he discovered the custom knife world at a local show. “After collecting a number of factory knives, I bought a Spyderco that was designed by Robert Terzuola that got me interested in the custom knife world. I went to a knife show in Pasadena and was so impressed with all these custom knives that were way more money than I wanted to spend, so I figured that I was going to make my own. So I bought a square wheel grinder, drill press and a buffer, some ATS-34 steel for the blades and some Micarta for the handles and went to work. I then found out why custom knives cost so much!” Inspired and determined, Pete made his first knife in 1997.

You might say he has steel in his blood. There are two sides to…