0
SHARES
43
VIEWS
Share on FacebookShare on Twitter
Originally created for the protective detail of a Jordanian prince, the new Benchmade Model 860 Bedlam offers the average user a chance to own this heavy duty folding fighter in a street legal version.

One of the high points of Benchmade’s 2010 line was their release of the Model 8600 Auto Bedlam (see Make Mine Auto, in the Nov. 2010 Tactical Knives) they had originally produced for the protective detail of a Jordanian prince. Obviously inspired by the jambiya and kyanjar daggers that have been universally used across the Middle Eastern world for hundreds of years, the knife offers a deeply curved 4.25-inch blade of 154CM stainless steel. Most historians feel the blade shape was derived from the claws of large predators and the dagger is normally used in a point-in, sweeping over-hand stab or slash. (While “jambiya” is the best known name in the West, this is primarily the term used for the dagger in Yemen and there are various other local names for the basic style in each area where it is used. “Kyanjar” is the name used for the dagger in Oman and the Jordanian variation would be called a “shibariya.”) 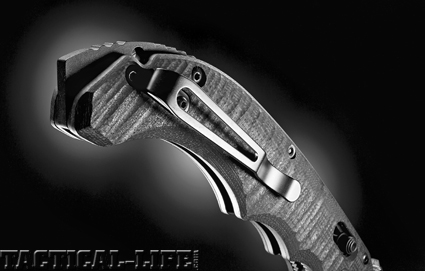 The carry clip is reversible for either left or right-hand, tip up carry. An extension of the handle liners provides both a potential striking weapon and window-breaking point.

Manual AXIS Locks
Of course, given the 8600 has an Auto-AXIS lock, the model was off-limits to most American knife users because of our many federal, state and local switchblade restrictions. Fortunately, the AXIS lock was a manual system long before Benchmade also started using it as an ambidextrous release on many of their LE and military autos, so it was a totally logical move to redesign the folder as a conventional one-hand opener. The Model 860 manual Bedlam is currently being offered with a straight edge or ComboEdge, and the blade can come polished or BK1 coated. Suggested retail prices run $220 for the polished blades and $235 for the BK1 coated models.

Heavy-Duty Fighter
Simply picking the 860 manual Bedlam knife up and opening it will tell you that it was created for serious use. At 7.1 ounces, this knife has a very solid feel in the hand. The textured G10 handle scales cover a firm steel frame and include a reversible left- or right-hand carry clip. Both the blade opening pegs and the AXIS lock are also totally ambidextrous. A projection on the end of the steel handle frame offers both a striking weapon and a potential window-breaking tool. 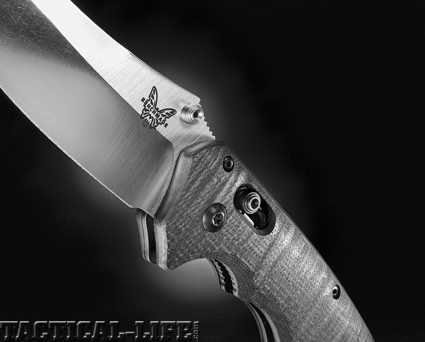 Both the opening pegs and the AXIS lock are totally ambidextrous, a feature that made this knife very popular with southpaw users.