0
SHARES
1
VIEWS
Share on FacebookShare on Twitter
The knife may not be the primary weapon of today’s soldier, but he values its versatility. Stealth is the hallmark of the combat knife.

The nature of warfare has changed over the past decade, and we no longer see massive armies facing off on a barren battlefield. Modern battles are more likely to be small engagements between squads, platoons and company-sized units. During this time, our military has learned that the use of smaller elite combat units has its advantages. These units are often given the title of “Special Forces,” and if we are referring to a group such as the Delta Detachment, the Army Rangers or the Navy SEALs, the word Special is an adjective.

Change that to a noun, however, and we are talking about the U.S. Army’s Special Forces, otherwise known as the Green Berets. The Army Special Forces is one of the most elite groups of soldiers in the world and the selection process is rather stringent. The Army’s code designation for this enlistment option is the “18 X-Ray Program,” and the candidates are often referred to as “X-Rays.” 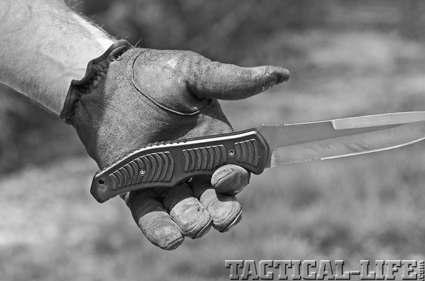 The knife balances right at the forefinger, making it neither blade- nor butt-heavy. The handle was a good fit with or without gloves.

The X-Ray Family
In some circles, it could be considered a rash move to use the Special Forces designation on a commercial product. However, in the cutlery world, Darrel Ralph has designed a series of “18-XRAY” knives. As a knifemaker, Darrel himself is considered part of an elite group known for their quality and design abilities. When he designed the 18-XRAYs, they were tailored for the needs of the Special Forces, and the designation seemed a fitting tribute. 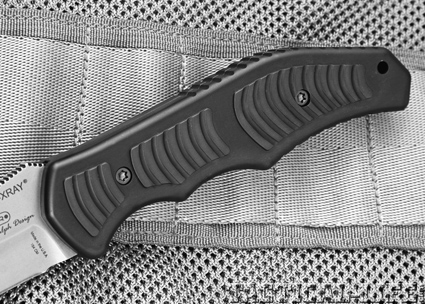 The aluminum handle scales are ribbed to improve the grip. They totally encase the tang of the knife and make a formidable impact weapon.