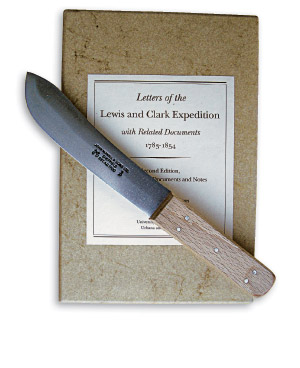 Recently I noticed custom knifemaker Ed Fowler asking a question on a cutlery website about the knives issued to the men of the Lewis and Clark expedition. Given this was an official U.S. Army-backed project, and how well most activities on the trip were documented, it would seem it should be easy to identify the knives used. What Ed was asking about were the 24 “large knives” listed as supplied by the Harper’s Ferry Armory and issued to the troops on the expedition. “Were they manufactured at the Armory? If so, what did the knives look like?”

The “what did they look like?” is the first dead end. No description was ever given and no documented example is known to still exist. When Ed suggested the Armory might have made these knives, a noted knife historian questioned whether there was any proof the knives were a Harper’s Ferry product. As I understand the expert’s reasoning, he felt it more likely the troop’s knives came from the same stock bought for Indian trade.

Lewis’ packing list states they carried 288 “small knives” and 36 “large knives” in their Indian trade goods supplies. I have been told the trade knives were I. Wilson brand, but all I was able to determine was that they were English made like the vast majority of cutlery used on the frontier. Could the troop’s issue blades be the same as the “large knives” it carried for Indian trade goods? I called James Hanson, the curator of the Museum of the Fur Trade in Chadron, Nebraska, and asked if he had any information on the subject. He wasn’t able to answer my question but felt that, given the issue knives were supplied with a belt and sheath, it was likely the Armory made them. English trade knives never came with a scabbard. Hanson also pointed out that historians were still arguing about what model rifle was actually issued to the men.

During my own research, I found that Lewis and Clark went to the Harper’s Ferry Armory with a letter from the Army requesting that they make and supply the expedition with such arms and equipment as they required. We know this included 15 rifles (but not what model), 15 powder horns, 15 bullet molds, 15 gun worms, 15 ball screws, 40 fish giggs and 60 pipe tomahawks. As mentioned earlier, there are also 24 large knives listed. A factory that was capable of making a firearm from the ground up could probably manufacturer any of these items.

Hanson also mentioned that the University of Illinois had published a book called Letters of the Lewis and Clark Expedition with Related Documents 1783-1854 that I might want to check out. A quick Google search dug up a used copy at a reasonable price and on page 111 of the first volume I found what I was looking for. In a letter from Lewis to President Jefferson, concerning a dirk he had forgotten to pack, he tells the president that “the knives that were made at Harper’s Ferry will answer my purposes equally well and perhaps better.” Lewis, at least, thought the knives were made at the Armory.

When you consider how difficult it is to document the equipment of this well planned military expedition, is it any wonder we know practically nothing about the big knife Jim Bowie carried? —Steven Dick, Editor-In-Chief 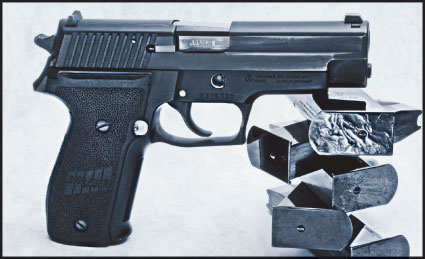