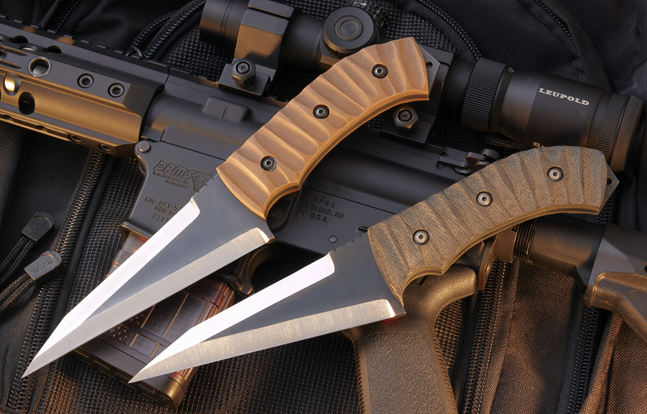 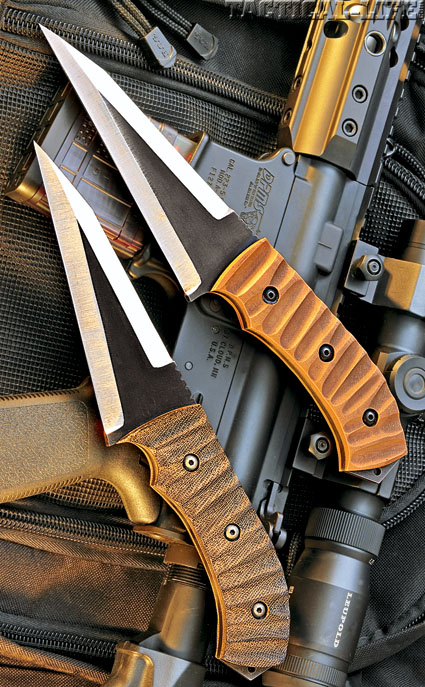 Our cover story this issue is Wilson Combat’s Star-Light Tactical, their latest collaboration knife with pistol grip makers Hogue and custom knife designer Allen Elishewitz. This knife offers the user a tough, practical American made folder with all the class Elishewitz is legendary for putting into his customs. Check out Denis Prisbrey’s article for the full story.

Spartan Knives have once again gone back to the Bill Harsey design fountain to create what some of us feel is one of the best mid-size combat knives on the market. On the other hand, if you ever wondered what a single function fighting knife designed by a trauma surgeon who has actually served in an infantry unit would look like, Mike Janich’s story on Miguel Montagnese’s Scalpel Works “11-Bravo” will be of interest to you. Montagnese has some strong opinions on what works in the real world and it is based on a lot more than pure theory.

BlackHawk has been producing practical LEO and Military web gear and cutlery for a number of years, including a dagger specially designed for British Spec Ops use. Recently they introduced the “Gideon” series of fixed blade in a choice of tanto or drop-point. See Tim Stetzer’s feature for all the details on these useful new battle blades.

Ever notice how you seldom shoot a buck more than a few minutes before sundown? Field dressing game can be both difficult and dangerous in the dark but SOG Specialties’ Blade-Light series will solve that. Long time hunter and knife user Terrill Hoffman wrings out these new models on his Chestnut Mountain proving ground.
Okay, we have admit we were a little skeptical when TOPS Knives approached us with a model designed for a comic book super hero by martial artist Johnny Tsai by Clint Thompson makes a good case for it being a highly practical jungle chopper in its own right. We still may not know who “Snake Eyes” is, but he seems to carry first class cutlery.

Way back in the September 2001 issue of TK we covered an interesting joint design project between TOPS Knives and Jeff Randall called the “Laser Strike.” Basically, this was a knife created around the theory that the most important function any survival can provide is to help start a fire no matter what the conditions are. That model was fairly short lived for a number of production reasons but ESEE Knives has introduced the generation II version this year that is every bit as useful. Our globetrotting contributing editor Reuben Bolieu takes to the field with the 21st Century Laser Strike and puts it through its full paces.

Rick Hinderer has long been one of the most in demand tactical makers around with a waiting list of potential customers that runs into years long. Kershaw’s tough–as-nails and totally American-made Zero Tolerance family of blade has added not one but two Hinderer designed tactical folders that should find a welcome home in the pockets of those that actually go and do! Long time Hinderer fan, Anthony Lombardo covers the knives in his usual through style.

Finally, we honor the battle exploits of Congressional Medal of Honor winner Jon Caviani and his deadly Gerber MK-II in Vietnam. Don’t let anyone ever tell you that combat knives are never used as weapons in modern warfare! 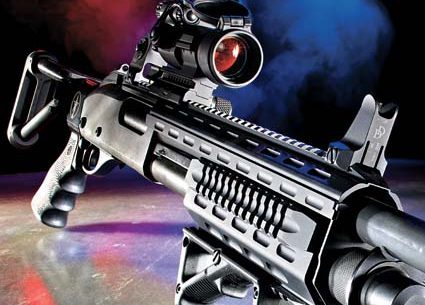