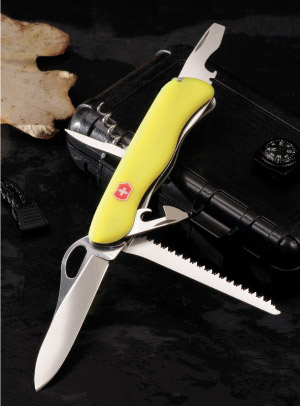 In 2003 Victorinox broke their stale old rut by introducing a one-hand-opening model that also featured a locking, partially serrated blade and the standard SAK implements. This model was originally designed to fill the needs of the German Military (Bundeswehr) contract and, as usual, Victorinox also created a “civilianized” version for the mass market. Now, with some help from custom knifemaker SwissBianco, the One-Handed Trekker (OHT) is ready to take the next step.

Blade Origins
Initially, the One-Handed German Army Knife (OH GAK) was quite a success, with the German Army signing an exclusive contract with Victorinox to supply their knives. Previously, Victorinox was only one of several suppliers for the old 108mm German Army Knives (GAKs), which SAK enthusiasts will know as the Safari series.